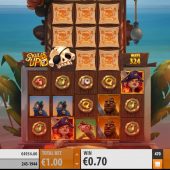 Skulls Up slot by Quickspin is following the most popular theme of late which seems to be that of pirates for some reason. Numerous pirate games have appeared recently, including Iron Dog's excellent first Megaways game Pirate Kingdom, Barcrest's Pearl of The Caribbean and a rather juvenile-looking and pretty awful Buccaneer Blast from Playtech. Here it's more calypso than cannon with a picturesque tropical island background and music by a steel drum band reels made from wooden planks. So will Skulls Up mean bankroll up here, or will it be forever locked in the dead man's chest?

We get 243-1944 ways to win here so that means a 5x3 grid with no fixed pay lines on Skulls Up slot. Symbols can appear stacked because they fall as individual tiles and the 5-of-a-kind pays are 20x bet for No Beard, 15x Biggie, 7.5x Smelly, 5x for Wrench or Biscuit the Parrot and five card values award 4x for the Ace down to 1x for the 10's. You have two types of Wild here which we will get to shortly and the Treasure Chest is a scatter and appears on the centre 3 reels.

There is a standard White Skull which can appear on the centre 3 reels and acts as a your Wild. You may also see a Golden Skull and this is the important one as above the centre 3 reels there is a 3x3 grid and each Golden Skull will rise up after landing and open one position above the reel it landed on. So one Golden Skull would open up the game to 324 ways and if you liberated all 9 positions the game would be played on a 3-6-6-6-3 grid of 1944 ways. This is unlikely in the base game though.
The Golden Skull will trigger a respin and it will turn into a normal White Skull Wild and remain in place for another spin too. If subsequent Gold Skulls appear during this, the respins continue and the positions open up further to increase the ways available. When it becomes a White Skull it will fall away on the next spin but leave its position open as an expanded reel until the feature ends.

Landing the 3 Chests on reels 2, 3 and 4 triggers 6 free games. During these any positions opened up in the extended reels are sticky throughout and when you have landed a Gold Skull 3 times to expand any reel fully to 6 rows, you get 2 extra spins meaning a maximum of 12 can occur. White Skulls will now liberate a position above the reels too, whereas Gold Skulls will behave otherwise exactly as in the base game, turning White after the respin then falling away on the next one. Some decent potential here although you would have to be very lucky to win 500x bet or more.

Skulls Up slot is pretty dreary despite the jolly calypso music and numerous sound effects that substitute for playability. The RTP at 96.26% is fine but otherwise there's nothing of substance in the mechanic or potential here. Base game wins over 10x are hard to achieve and the free spins are usually pretty dreadful and over very quickly while being frustrating to watch. I think being bored out of my skull is something I never want to repeat and I will achieve that by not playing this slot ever again...