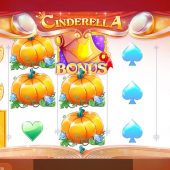 Cinderella slot is a generic themed game and not a trademarked one which is a relief as we can be spared the juvenile subject matter to a certain degree. The reels are actually set against the background of a theatre stage and what we see are props from the stage show presumably but we do have the cartoon movie type of musical background when the game is being played. We know Red Tiger always pack their slots with features so will we get Prince or pumpkin?

As with most Red Tiger slots we have the standard 20 pay lines over 5 reels of 3 rows and stacked symbols feature on them. The Wild pays your best award for a 5-of-a-kind at 32x bet followed by the pumpkin at 10x, the magic wand at 6x, eye mask at 4x and the last of the picture icons is the sewing kit at 2x bet for the 5. The card values are represented by suits and all pay 1x bet. There are 2 bonuses triggered by either 3 scrolls or 3 free spins logos but first we need to see Cinderellas in-play random features!

When she appears at the window in the top of reel 1 she will grant you one of 4 single-spin features:

Slipper Trail - the Glass Slipper will appear and walk around the reels until it vanishes, leaving a Wild on ever position it walked across.

Clock Strike - we go back in time and get awarded a win from the past.

Fairy Magic - the Fairy Godmother waves her wand and all the symbols under the trail it leaves become the same and award a win.

Carriage Spin - the carriage rushes over the grid and leaves symbols spinning until they settle down to a decent win.

If we see 3 scrolls land in view we enter the Grand Ballroom and get to choose from a background of scrolls of which each will reveal a colour token. On the left of the grid there is a scale with 4 prizes each needing 3 similar colours to open them. The top one is Gold and awards an amount of hundreds times bet down to the green at the bottom paying a smaller amount such as 25x bet.

The Ballroom sits inside the Castle and if this appears on reels 1, 3 and 5 we are given a quantity of free games which is revealed to us, 3 or more. Naturally Cinderella enhances each spin with her in-play features for you! This mechanic occurs in many Red Tiger games such as Lion Dance and always guarantees no spin will disappoint.

Cinderella slot, as is usual from Red Tiger, is packed with features and is not too reluctant to give the random in-play ones. The graphics and sounds are in the usual style their slots have and the RTP in their usual 95-96% range, in this case 95.35%. The theme is forgettable though but the features and big-win potential more than make up for that as do regular decent-sized base game hits to maintain that all-important bankroll. Unlike other fairytale slots, such as Red Riding Hood from NetEnt and Yggdrasil's Beauty and The Beast, this one might be left off my bedtime reading list.