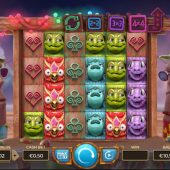 Easter Island 2 slot is Yggdrasil's sequel to the rather ludicrous Easter Island slot from 4 years ago. The first thing to notice is they've kept the annoying, jiggling pink phallic-looking 'statues' by either side of the grid which now seems to be set over the background of a Caribbean beach party. Equally irritating music and sounds accompany the theme which you might expect if Anne Summers ever designed a slot! Gone is the recent quality of slots they created like Orient Express slot and especially Poprocks slot with its huge potential. Instead we get a lame old game with changed artwork. So can we get some rock solid wins here for our bankroll or will it be a case of ill wind from the Pacific?

We get 25 pay lines over 6 reels of 4 rows each here on Easter Island 2 slot. Your 6-of-a-kind pays are 40x Eagle, 10x Fox, 8x Turtle, 6x Purple Fish, 3x Blue Fish with four card suits all paying 2x for a full line of 6. Symbols appear stacked and singly and your wins are responsible for the modifiers.

Easter Island 2 slot was tripe the first time round and remains so. It's one of the most headache-triggering slots I ever saw, due to the constant writhing of those 2 dodgy-looking 'statues' by the reels. It's just a fire-up and forget slot that you would leave on auto-play awaiting the big win animation and sounds, as there's damn all else to see here. As for potential, it's capped at 2500x and this was achieved twice in 1 billion test spins. Go figure...