London, UK is in the depths of winter, with daily temperatures sat just above freezing. This can only mean one thing, it’s time to pay our annual visit to ICE Totally Gaming, at ExCeL London. The team at Gamingslots certainly look forward to our annual pilgrimage to The Docklands in East London, where the casino world completely take over the whole of ExCeL, a mere 100,000 m2 of exhibition floor space, for a full 3 days.

As ICE has a very strict policy on no videos and photos, Gamingslots has to rely our faithful website visitors to send us their clips and pics from the show. We have put together a short video from this year’s show, which is just over 90 seconds long and well worth a watch.

This summary video picks up on several elements at ICE that really stood out. There was the continued focus of several of the main slots developers, such as Playtech and IGT to continue the roll out of branded slot games. We are expecting a fairly short wait before Playtech launch Suicide Squad slot and we have already seen half a dozen slots online from the Batman series in the latter part of 2016 from Ash Gaming – a Playtech subsidiary. They are not the only company doing this, with Microgaming having already launched Tarzan and Yggdrasil Gaming are expected to release The Jungle Book in the first part of 2017. Land-based casinos are no different, with Walking Dead 2 slot announced in 2016 at G2E in Las Vegas and The Simpsons slot already proving a huge hit. This branded slot tie-up seems to a real growth market for all developers and we expect to see much more of it in 2017 and beyond.

Confidence in VR
What was clear at ICE 2017 was the growing investment in developing VR (virtual reality) games and products. A whole corner of the NetEnt stand was dedicated to their new Gonzo’s Quest VR slot (see video below). We weren’t patient enough to wait to check out NetEnt’s new VR product, as there was a line. So instead we went over to the Join Games stand to try out their VR slot Kleopatra. Once you put on your headset you find yourself in Kleopatra’s tomb with realistic artefacts and stone walls surrounding you. A wall of reels greet you and play starts when you are ready. Hit the bonus feature and the floor opens up in front of you and you descend into the crypt below for a pick’em style bonus. 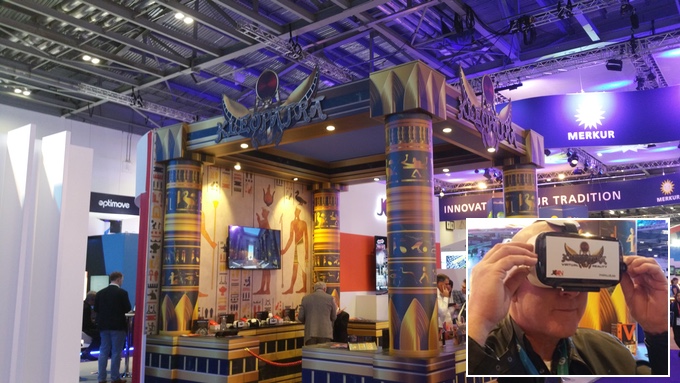 Many vendors who were exhibiting VR products at ICE were convinced that 2017 will be the year that we see the rise of VR games, as headsets become more common in consumers houses and willing customers look forever different ways to entertain themselves.

Innovation comes in many forms

As well as VR there were many other technologies on show at ICE. The touchscreen on bigger devices seemed to be pretty popular, with several table games and card games digitally imposed onto bigger screens. Presumably for a more immersive experience. There was also some ‘blue sky thinking’ from relatively new slot developer Endorphina, with the launch of their vaping-inspired slot ‘Diamond Vapor’. It is hot on the heels of their Twerk slot and just goes to show you don’t need state-of-the-art technology to be innovative. What was notably missing was the buzzword of 2016, ‘wearables’. There seemed a serious lack of investment in wearable technology, which we have also seen in many other markets outside of gaming. 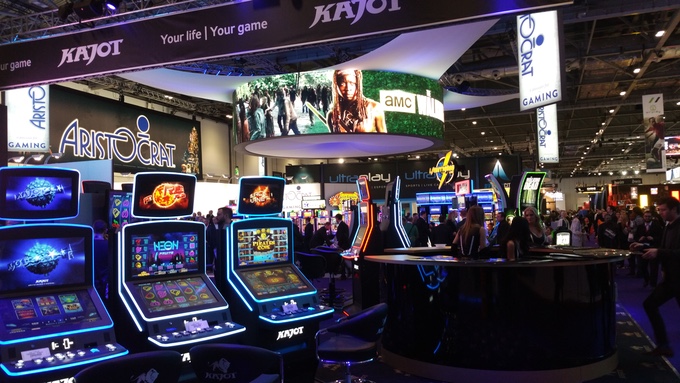 There were many many more exciting and interesting technologies on display at ICE, but unfortunately, I have to summarize this article. The casino industry looks very buoyant from what we witnessed at ICE this year. Although there was nothing that struck us as completely new and unseen, there was growing confidence in new technologies such as VR. This presents an exciting opportunity for the casino industry and we look forward to 2018 to see how this develops further.