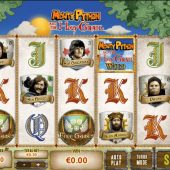 On the reels...
We get 30 pay lines on 5 reels of 3 rows with single symbols only. The game's logo is the Wild and pays the best 5-of-a-kind win at 167x bet but there is also a special Grail Wild too which pays the same and only appears on reel 5 but uniquely it can appear stacked. This Grail Wild marches to the left when appearing and may leave Wilds in its wake as it traverses the reels on the same row, If landing fully stacked it's feasible all 3 rows could be filled with trailing Grail Wilds for a maximum game pay of a hilarious 5000x bet!

Graham Chapman in his role as King Arthur pays 33x bet for 5 followed by John Cleese as Sir Lancelot at 27x, Sir Galahad at 20x, Sir Belvedere at 17x, Sir Robin at 13x and last of the cast Patsy at 10x bet for the 5. The card values pay either 5 or 4x stake for all 5 on a line and are the last of the paying symbols. Reels 1, 3 and 5 hold the game's scatters in the form of a shield and we need all of these to trigger the bonus features.

Quest of Camelot free games
There are 3 types of games to get and being Python choosing them won't be simple. You are faced with 12 shields to pick from and in the background you will see a collection board representing all 3 types of free games. There will be blue, red or green shields on the boards each representing one of the types and you pick shields to add enhancements and spins until you fill one of the feature types up. You will end up with at least 5 free spins with at least one modifier.

The Castle of The Britons (Modifiers) - The French Invaders may appear on any spin and add up to 3 random Wild symbols to the spin result.
The Trojan Rabbit may add a stacked Wild on any Trojan Rabbit spin.
The French Catapult adds a random Wild on every French Catapult spin.
The Nuns of Castle Anthrax may appear on any spin to add a locked Wild for all remaining Nuns of Castle Anthrax spins.

The Cave of Caerbannog (Modifiers) - Tim appears on the first spin and turns up to 4 symbols into locked Wild symbols. The locked Wild symbols will remain in position for all Tim spins.
The Killer Rabbit may appear on any spin to add up to 5 sticky Wild symbols per spin. The sticky Wild symbols remain on the reels for all remaining Killer Rabbit spins.
Holy Hand Grenade may appear on any spin to create a block of Wilds anything between 2x2 and 3x3 in size.
The Black Beast of ARRGH! appears on the first spin and adds a stacked Wild on a random reel. The stack of Wild symbols is locked in place for all Black Beast of ARRGH! spins.

If you get more than one modifier they will play off for a certain amount of the free games you've collected and then the next one applies and so-on.

Our View...
Monty Python and The Holy Grail slot is fun and packed with features and will certainly please any slot player who appreciates the Monty Python humour! The graphics aren't hugely detailed but with the inanity of the characters and silly music you won't be taking much notice. The RTP is 94.13% and the base game pays are frequent with the Grail Wild dropping in often enough to keep your balance respectable and has the potential for very big wins. It's fun doing the picks before the bonus starts and these free games can be quite rewarding. The trail to this Grail is most definitely one of fun, farce and frivolity!