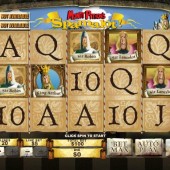 Monty Python have long been one of British comedy’s finest creations and it all started with the comedy troupe’s Flying Circus that ran until 1974 that provided them with the platform to take comedy to the next level with the Life of Brian and the Holy Grail movies.

Then came the Monty Python musical, Spamalot, and that is how we have reached our current destination with this bizarrely-themed slot from developer Playtech.

This 5-reel, 20-payline is a fantastic caricature tribute to the work done by the named individuals above that shone through in the musical of the same name.

It is loosely based on the legend of King Arthur but if you’re expecting something in the same aesthetics league as Microgaming’s visually-stunning Avalon II slot then you’d better look elsewhere.

This slot is everything something related to Monty Python should be - ridiculous, obscene, unbelievable and hilarious.

The reels are full of characters from the musical in cartoon form such as King Arthur, Sir Galahad, Sir Lancelot, Sir Robin and the Lady of the Lake.

Storm the Castle and Avoid the French Cows to Win Big

There are four bonus features that make up this slot and they appear one by one every time you hit the Bonus symbol on Reels 1 and 5 at the same time.

You will first trigger the Storm the Castle Bonus. In this bonus feature, you must move your knights into a prize circle where they will reveal a prize. If the French knights in the castle throw a cow that hits you the bonus feature will end. If they miss, you get to move another knight into the prize circle to reveal another prize.

The second bonus feature is the None Shall Pass Bonus. In this feature you take on the Ridiculously Brave Black Knight.

You have four attempts to cut a limb off. If you succeed you will win a cash prize with a multiplier up to 5x. Every time you miss the knight then your multiplier value will drop by 1.

Gamble with the Knights Who Say Ni to Win Prizes

You can either accept the cash prize on offer or reject it and ask for another prize. You have three chances to pick your prize.

Kill the Rabbit and Save Your Knights to Earn Rewards

You Can Earn up to 10 Free Spins with Extra Wilds

If you thought that was it for Monty Python’s Spamalot then you’re gravely mistaken. As if four different bonus features weren’t enough, there’s also a free spins bonus round.

This is triggered if you hit three or more Monty Python Logo Scatters across the reels and will reward you with 10 free spins. After each free spin, 1-5 Wild symbols will be spread across the reels to increase your chances of hitting winning combinations.

Catch your breath now because that still is not all. There is also the Holy Grail Jackpot that you can trigger through the free spins.

During the free spins you must collect five jackpot symbols. You will then need to navigate through six levels to trigger the progressive jackpot but at any point during those six levels a giant foot could come down and squash you.

I have to admit, I am a massive Monty Python fan. From the Meaning of Life to the Holy Grail, I adore everything they have done.

So I did keep my expectations low when I began playing this Spamalot slot. It did not disappoint. It has constant Monty Python references, bonus features galore, free spins and even the chance to trigger a progressive jackpot.

I honestly do not think there is anything they could have added to make this slot better.