The War of the Worlds slot

Free The War of the Worlds slot

The War of the Worlds free play demo

The War of the Worlds slot review 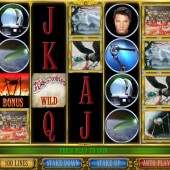 In 1897, science fiction writer HG Wells released a terrifying novel about marauding Martians invading - of all places - Woking, in the south of England.

Many adaptations of the book followed, including a Hollywood movie in the 1950s that tapped into American paranoia about the Communists.

Even Steven Spielberg managed to bring out his own film in 2005 which starred Tom Cruise battling a bunch of little green men as they laid waste to most of New Jersey.

Then, prog musician Jeff Wayne released possibly the most famous interpretation of the novel with his 1978 concept album.

The subsequent stage show - which boasted the appearance of a giant hologram of Richard Burton's head (the album's original narrator) - is what is celebrated in this online slot from renowned developer, Ash Gaming.

Coins run from $0.01 to $1.00, but it's worth noting that the game is a straight 100 fixed payline slot, so factor that in before planning your betting strategy.

Invasion of the Jackpot Snatchers

The music is, sadly for fans of the classic rock album, not taken from that, but rather made up of fairly standard marching music for dramatic effect. War of the Worlds is full of imagery from Wayne's stage show, and although it is more concerned with holographic heads than any classic images of the book, but it still works on most levels.

On the reels - other than Richard Burton's floating head - you will find an observatory (always useful for spotting a little green man or two), a laser, an alien spaceship, a Martian tripod, burning houses, and death rays, plus some Jack-to-Ace symbols making up the numbers. A $5,000 jackpot is awarded for hitting five Tripod icons at the maximum bet.

The War of the Worlds Wild substitutes for all regular symbols in the game other than the Bonus Scatter. If two Wilds appear on the reel they will expand to fill the entire reel.

Fight Back Against the Aliens and Win Prizes

The Fighting Machines Bonus is activated when you hit three Bonus Scatters on the reels anywhere. Here, it's your chance to take on the evil aliens, man the guns and shoot the baddies down. If you survive an attack with all your cannons intact you will proceed to the next battle. There are three stages of the battle, with bigger prizes awarded the further you get.

With 100 fixed paylines, expanding Wilds, and a potentially juicy bonus jackpot, there's certainly enough here for the big bettors to get excited about. I found both the expanding Wilds and the bonus hard to come by, however, so maybe the slot isn't as generous as it first appears.

The music and animation are great too. (Try, if you can, to select the FULL version before you play.) As for other sci-fi greats online, check out Betsoft Gaming’s 3D sci fi-themed slot, Out of This World, while Cryptologic's Area 21 is a good extraterrestrial alternative.