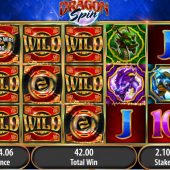 Dragon Spin slot sounds like it is going to be a totally overblown Oriental themed, but it is far more subtle than that. Aside from the Wild and edge of the window having engravings from Chinese tokens you'd think the game was akin to a theme of Dragons. This goes for the soundtrack too, where the usual Oriental pipe-and-cymbal tune has been interwoven with a modern piece of Techno beat music. The style and design of the slot is unmistakably Bally, with similar stylings seen in slots like Hot Shot Blazing 7's or Thunderhorn. So will this Dragon get you in a spin?

Dragon Spin offers up 30 pay lines over a standard 5 reels with 3 rows with all symbols beginning as singles. The pays are nice and straightforward too with any of the 4 Dragons, red, purple, blue or green paying 1.67x bet for 5-of-a-kind while the remaining card values all pay 0.67x bet. Now with single symbols these pays would be awful which leads us to the game's first feature, the in-play random symbol stacks.

During each spin, there is a large portion of each reel which has a super-stack which is filled with one or 2 of 3 mystery symbols randomly selected as you press 'start'. Each reel will get the same symbol(s) and this is the only way we can see the Wild as it is not on the basic reels. This naturally ensures multiple winning lines when they land together, which they do frequently thus negating the low pays for single 3 or 4-of-a-kind awards.

The final icon is the Emerald Brooch appearing on the centre 3 reels. These all landing in view as scatters will trigger 5 free games of 3 different types, which the slot selects for you on a rolling reel which stops in a window with its choice. You can't retrigger them but the enhancements are good:

Raining Wilds - 3 to 10 Wild symbols will fall randomly onto the reels before they stop.

Persisting Wilds - on the first 3 spins 1 or 2 Wilds will appear and become sticky for the remaining spins, on spin 4 you will get 1 to 3 Wilds and on the last spin 2 to 7 Wilds.

Reel Blast Set - you get 3 grids in view thus 90 pay lines. On the centre 3 reels of each slot you will get the same 3x3 block symbol and hope the outside reels on each set match this!

Dragon Spin is a slot of extremely low volatility with very low potential pays. A screen of the top Dragon icons only pays 50x bet and if you get Wilds in the free games, 100x bet. The base game though frequently awards reasonable pays and the RTP is a fair 95.94%. The graphics and sound effects are kind on the ears too, but in all honesty I could only ever play Dragon Spin when needing a 'kind' game to burn through a bonus Wagering Requirement. I'm afraid this Dragon's flame doesn't pack much heat...