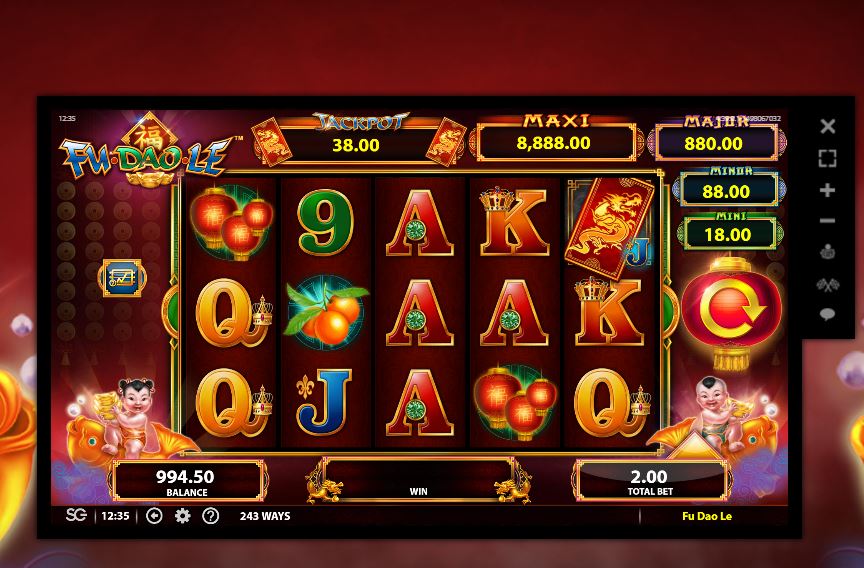 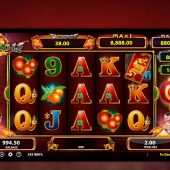 Fu Dao Le is translated from Mandarin to mean 'Fortune Has Arrived' which made me smile as I like to see a title filled with optimism before I spin. Bally traditionally do the Oriental theme very well as you may have observed with classics such as 88 Fortunes and Double Dragon and it's no different here with smooth graphics and animations applied to the various Chinese icons when they land in a winning combination. The reels are set in a background of red with lucky tokens and it should go without saying you will be listening to some gentle strains of traditional music as you spin. The important question though is whether fortune will arrive for you - or not?

On the reels...
Unusually for Bally, we don't have pay lines, but 243 ways over the 5 reels of 3 rows. This means that like their Cash Spin slot we simply need to land symbols on consecutive reels from left to right to award wins. The symbols can appear more than once on each reel with a Wild token called 'Wonus' possible on the centre 3 reels, but there is also a 'Clumped Wild' on reel 3 which will expand to fill the reel. This can be vital as when that occurs you may be taken to a Jackpot Game which is a grid of tokens from which you choose until 3 identical ones come out. Depending on which token you get 3 of, you will get one of four internal jackpots shown on the right corner of the reels of 18, 88, 880 and 8888 which are mini, minor, major and maxi respectively.

There is a fixed small jackpot of around 20x bet which you will win if you land a Red Dragon symbol on both reels 1 and 5 in the same spin, and tends to come in quite frequently.

You will also observe stacks of Gold as the reels spin and those are mystery symbols - when any land in view they all reveal the same icon (aside from Wonus or Red Dragon) which hopefully benefits your final spin outcome.

The minimum stake is 38 coins and you probably know that '8' is a number associated with luck in Chinese culture, hence it appears often in this review! Due to this odd amount it's best we reveal the pays for 5-of-a-kind in coins rather than times bet. It's rather straightforward as the Goldfish, Lanterns, Gold Bowls and Oranges pay 38 coins while the six card values all pay 25 for the 5. As is the case with slots such as Book Of Ra Deluxe, the Wild (Wonus) is also the scatter to trigger the bonus round, which occurs when you land all 3 anywhere on the centre reels.

Wonus bonus spins
Having landed the 3 Wonus Wild tokens on the middle 3 reels we are awarded 8 free games with different reels. This is good because the Wonus disappears from the centre reels and is replaced by standard Wilds which have the same appearance as the expanding one on reels 3. You may now be thinking 'aaargh! no retrigger!' but a stacked Wonus is added to reel 5 and it awards 1 extra spin for each row it lands over. We aren't quite finished though as the expanding Wild on reel 3 can now award a 2 or 3x multiplier and of course the Gold Mystery icons still appear. It's therefore possible to see reels 1, 2, 4 and 5 all have the same icon stacked for a 243x bet win and this to be multiplied by 2 or 3x by the Wild on reel 3.

Our View...
Fu Dao Le slot is a pretty awesome medium-volatility slot that fulfills nearly every facet of game play. You have jackpots, a bonus jackpot, expanding Wild and an interesting free games round with some good hit potential. Okay, Bally's rather silly mixing of the terms 'Wild' and 'Bonus' to come up with a hybrid 'Wonus' may seem odd, but you don't see the word while you play and a very decent 96.00% RTP means they are forgiven! From their early days of mechanical slots and Pinball machines Bally Technologies have rarely produced a really poor game and Fu Doa Le is no exception. For the online slots player I can confirm that in the case of Fu Dao Le Slot that fortune certainly has arrived...