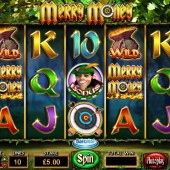 Robin Hood has long been an iconic part of British myth and legend. His “steal from the rich and give to the poor” approach to life in Sherwood Forest has inspired numerous translations of his legend onto movie, television, music, and radio. It has also seen him get his own slot or two. Here, experienced developers Barcrest have released their own ode to the man himself.

Merry Money is a 5 reel, 10 payline slot that puts Robin Hood at the centre of the action. Obviously the merry money is here instead of his merry men and the reels are set against the leafy environment of Sherwood Forest itself... or so we presume.

In terms of symbols, we are not exactly treated to much variety on this slot. There is the Merry Money logo that can pay out up to a 250x multiplier if you hit five of them across the reels. After that, there's just the regular 10-through-to-Ace symbols before we reach the special symbols.

Pick Your Target to Win Big

There are two Scatters on this slot. The first is the Bow and Arrow Target Bonus symbol. You will need to hit three or more of these symbols across the reels to trigger the Pick Me Bonus. You will then be presented with a selection of target symbols and you must select ones to reveal a prize.

Hit the Bullseye to Choose a Bonus

The second Scatter on this slot is the Robin Hood Bonus symbol. Hitting three or more of these across the reels will trigger the Target Bonus. This is a more interactive feature where you must click on Robin Hood to fire the arrow at the target. An arrow that lands in the red area launches the Win Spins Bonus. An arrow that lands in the yellow area will start the Hall of Plenty Bonus.

If you trigger the Win Spins Bonus then you must take on the trail of win spins to determine how many Win Spins you receive. You will then essentially play a free spins bonus round where wins are guaranteed on each spin. The bonus will end when all the free spins have been used.

Steal From the Rich to Give to Yourself

If you trigger the Hall of Plenty Bonus then you will be asked to choose a door between 1 and 6. You must then collect as much cash as possible from the rooms you choose before alerting the guards and awaking the Sheriff of Nottingham.

Robin Hood has been a prevalent character in the slots genre. You only need to look at the absorbing Robin Hood – Riches of Sherwood Forest from Incredible Technologies to see how well he has translated to slots online. NetEnt's very own Robin Hood – Shifting Riches is also a great option if you're looking for more men in tights action. This slot has a lot to offer in its own right. Considering there is no Wild or Wild-related features, it is quite thrilling. The bonus features are as varied as any bonus features on a slot should be. My only criticism is that the Win Spins could be easier to hit but then if that was the case the wins probably wouldn't be as lucrative. This can be considered a hidden little gem.