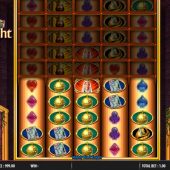 Mighty Black Knight slot may well have a title you are familiar with if you have played the WMS classics Black Knight or Black Knight II with their sticky expanding Wilds feature in the free games. Given that Barcrest, WMS and Bally are now in the fold of the SG (Scientific Gaming) group you won't be surprised that besides the theme, there are other similarities to those two slots. Immediately the soundtrack is a WMS mainstay consisting of chimes and clicks when the reels stop, exactly the same as many others such as Bruce Lee, and the icons are derived from the WMS Black Knight games mentioned. Can our money survive a joust with this Mighty Knight though, or will he run us through with his deadly lance?

On the reels...
Well, in keeping with the Castle in the background, you'll notice one set of 5 reels with 5 rows which are illuminated, and above them another set the same with a Portcullis over them. This is where we get our adjective 'Mighty' from, as when you land a 2-row Black Knight Wild fully in view, it will lift the Portcullis and expand all the way on to the top reel set too which like the lower one has 50 paying lines. This is similar to the WMS Colossal Reels games such as Kiss.

You pay 100 coins to play though and those Black Knights pay the same as the top-paying icon, the King, at 5x your 100-coins bet. This means that the maximum win is 500x bet for a full screen of expanded Wilds over the 100 lines. The symbols are all stacked up to 5 rows high and after the King, they pay 4x bet for the Queen, 2X for the Crown or Orb, 1.5x for the Ring or Map and finally 4 card suits all pay 1x for a full line of 5. A bonus tile appears on all 5 reels and will trigger the bonus round if 3 or more land in view, whether on the lower or expanded reels.

Mighty spins
Upon seeing 3, 4 or 5 scatters you will be awarded 8, 12 or 20 free spins respectively. You can retrigger them and the only enhancement is that like the original Black Knight slots you only need any part of the Wild to land on the grid to expand as opposed to both rows in the base game.

Big bets
It wouldn't be a Barcrest slot nowadays without the hideously expensive 'Big Bet' options. If you pay 20x the 1.00 stake you will get a series of 5 spins in which in the base game the Wilds will act as they do in the free games, expand with any part in view.

Pay 30x and you will get the same as above except that the card suits are removed from the reels. Pay an eye-watering 50x then you have the same as the 30x but now expanded Wilds will remain until a win occurs using them or the end of the 5 games, whichever is first.

Our View...
Mighty Black Knight slot will not appeal much to either those who like the original WMS duo, nor those players with deep enough pockets to play the Barcrest Big Bet games. The former will certainly prefer the WMS games' free spins format with the sticky Wild reels and the latter will prefer the higher chance of feature entry Big Bets usually bring, but not here! Then you are limited to a maximum win of 500x the base game stake, which is only 10x the highest Big bet amount. The RTP is 94.00% if you play less than 2.00 stakes, 96.00% for over 2.00 and finally 98.00% for always using Big bets. So the low roller is disadvantaged by 4% immediately, which over hundreds of spins can make a huge difference. You can't fault the sounds and graphics/animations but the game is frankly neither here nor there as a slot mechanic and thus a mighty good reason to avoid this Black Knight....