The Curse of Frankenstein slot

The Curse of Frankenstein slot review 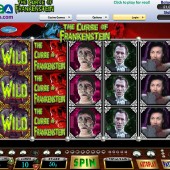 If, like us, you spent plenty of school nights up watching late-night horror films when you were meant to be doing homework, you'll recognize the theme of experienced slot developer Barcrest's Curse of Frankenstein slot.

A 5 reel online slot with just the 10 pay-lines, The Curse of Frankenstein is based on the classic British horror film from the Hammer stable which produced some great - and not-so-great - horror epics from the 1930s to the 1970s. Like Frankenstein's monster, they died but came back to life a few years ago and are now back producing horror films once again.

But it's the legendary 1957 film starring Peter Cushing as the medical student with a thing for bringing corpses back to life, Dr. Frankenstein, and Christopher Lee as the monster which is the inspiration here.

On the reels there are actual scenes from the film - presented in 50s-style technicolor - with a blood-soaked backdrop. Some icons are stacked for bigger wins, and winning combos burst into life with bolts of electricity and theatrical screams. As well as Q, K and Ace poker symbols that look like they've been stitched together by Frankenstein from other Q, K and Ace symbols, there's a terrified damsel in distress, Peter Cushing as the doc and Christopher Lee as Frankenstein.

The Wild icon substitutes for all regular symbols in the game other than the Scatter, and like other Barcrest slots like the Vegas-themed Grand Casino, is the mega payer, awarding a 50,000-coin jackpot when hitting five symbols across the reels.

Three or more Hammer Films logos on the reels triggers a Free Spins bonus. Initially you will receive 10 free spins with a 2x multiplier, but trigger the round with four Scatters and your multiplier rises to 25x. Hit the round running with five Scatters and your multiplier is a terrific, terrifying, 100x! Spins can be re-triggered and there's a maximum of 255 free spins to be won every time.

There are some really nice atmospheric touches in The Curse of Frankenstein, especially the horror film music playing over the top during spins, the ghoulish growls when you hit a win, and the satisfying Gothic chime noise when you alter the betting size. And with stacked symbols on the reels and juicy bonuses, the slot really delivers.