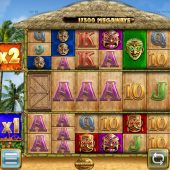 Survivor Megaways slot from Big Time Gaming gets the theme from the CBS Reality TV show first aired back in 2000 on US networks. We get the desert island where the castaways live as the background and tribal drum music as the soundtrack as we endeavour to break those urns open. Big Time Gaming have used a few licensed themes before including Who Wants to be a Millionaire? Megaways slot and of course the much maligned slot based on the world's most famous board game, Monopoly Megaways. So the natural question here is, will our bankroll be a survivor on this island too?

We depart slightly on Survivor Megaways slot from the standard Megaways reels seen on slots like Extra Chilli which offer from 324-117649 ways. Here the scrolling row of single symbols in in the centre and covers columns 2-6 with two blocks of rows above and below which offer rows of 1-3 symbols on each reel. This means the minimum ways are increased to 486 but the maximum is reduced slightly to 100842 ways, the equivalent of getting 5 reels of 7 symbols and one reel of 6 on Bonanza.
There are Female and Male Survivor Wilds which can only appear on the centre scrolling row either singly or together, a maximum of 2 on any spin or winning action. All winning symbols are destroyed and replaced by more tumbling from the top of each column. The 9-of-a-kind pays are lower than usual but we still get 50x bet for 6 Purple Idols, then 2.5x Red Idol, 0.7x Green or Blue Idol with six card values paying 0.6 down to 0.4x for a full way. This is obviously in reaction the the higher average number of ways per spin as opposed to the Bonanza format and of course the multiplying Wilds which may affect the wins.

Right, when Urns appear anywhere on the reels either side of the centre scroll they can be 1, 2 or 3 rows high. This respective number will be added to the Female or Male survivor. The Female Survivor sits to the left of the top section of the grid, the Male Survivor to the left of the bottom section. Urns falling in these respective sections will add multipliers, so if an urn lands on the bottom section and it 3 rows high, the Male Survivor wild will get 3x added to make him a 4x multiplying Wild should he appear on the middle scroll and count in any wins. The same goes for the Female and if both count in a win together, they multiply each other.

You need 3 or more Gold Survivor logos to trigger 15 free spins. Each one over 3 will add 5 spins and in the bonus 3 scatters will earn 5 extra spins with 10 for 4 and so-on. The scatters appear on the normal reels and not the centre scroll, same as in the base game while the Wilds still only appear on the scroll. Now you may have anticipated the enhancement in play here - yes, the Wild multipliers for the two Survivors hold their values from the spin triggering the feature and don't reset between spins now, they can only go up each time an Urn appears. So for example if one has reached 9x and the other 7x, you would get a 93x multiplier on any wins if they both appeared on the scroll and were active in the win. So it's very volatile!

Survivor Megaways slot is quite a good looking game and the maths here mean the base game is less volatile than you may be used to. The sounds and animations are good and the only drawback is the continual smashing of the Urns to add multipliers to the Survivors when they probably won't appear or count in the spin. The RTP is good at 96.47% and the feature seems slightly more frequent than it is on Bonanza, but it does have very big potential if those Wilds get bit early multipliers and then both appear together. So if you believe in survival of the fittest and think you're up to the challenge, give it a go...