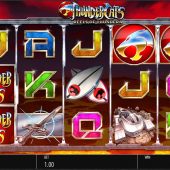 Thundercats Reels of Thundera slot by Blueprint Gaming has a trademarked licensed theme and so we know from this point on exactly what mechanic we shall get here - again. The Thundercats cartoon adventure series ran on US TV from 1985-1989 and you may have seen it in many other countries too when younger. Blueprint do these trademarked slots very well graphics-wise as we have seen with many before such as the first Thundercats, Mars Attacks, Top Cat and Worms Reloaded but as I said we know what game model we'll get here already. So can these cats add some thunder to our bankroll?

Yes, of course we get 5 reels of 3 rows each on Thundercats Reels of Thundera slot with 20 fixed paying lines and loads of in-play modifiers. The top symbol pays for 5-of-a-kind are 25x for the Wild and Logo Symbol which can as usual appear stacked. The Sword or Stick weapons are 15x, Surf or Vehicle transport 10x with four card values of either 5 or 2.5x. Cat Silhouettes are the scatter and can appear on all reels, but first the long list of in-play modifiers!

On any spin one of the six Thundercat characters may awaken and grant you their modifier:
Lion-O - applies random wilds to the reels.
Tygra - swipes some reels which may turn Wild, any win will retrigger the modifier.
Panthro - clones 2 to 5 reels together with identical symbols.
Cheetara - runs over the reels and reshuffles them for a win, can occur up to 5 times.
Wily Kit and Wily Kat - add mystery symbols to transform into the same icon.
Snarf - adds more scatter symbols to the reels to improve trigger chances.

There are also 4 additional modifiers which can trigger after any losing spin:

3 or more Cat scatters trigger one of 6 features on a scrolling reel which can be gambled for the next highest, getting you a rubbish cash award if you lose. From lowest to best they are:

Sight Beyond Sight - Pick an Eye of Thundera to reveal 1 of 4 outcomes which can be better bonus, cash multiplier, upgrade cash or stop.

The Black Pyramid - choose emblems to reveal 1 of 3 outcomes. Arrow to rise up, improve feature at top or top.

The Ever-Living - Free Spins with random 2-5x mutliplier on each and chance to win extra spins. In additional spins up to 10 multiplier can be given.

Hear The Roar - Free Spins with symbol upgrades when Lion-O lands, up to 4 upgrades. Retrigger chance of 5 more spins at the end.

Ancient Spirits of Evil - automatic if you get a 5-scatter-trigger. Bonus wheel wwith extra spins, cash values, additions made to cash vaues and upgrades via arrows to a higher interior wheel. Top award is 1000x bet, when you run out of spins you pick in the Ultimate Thunder Bonus a card which awards 2 to 10x mutlipier to your total, so 10,000x bet is possible!

Thundercats Reels of Thundera slot is slightly better than the other versions of this 20-line model you may have played as the top feature, if you are fortunate enough to get to it, has some huge potential and you can hit rare 1000x plus hits on it. As with Blueprint's trademarked slots, no efforts have been spared on the graphics and animations so visually it's good and the sound effects aren't overdone. The RTP is 95.53% which is lower than most slots you'll play nowadays but only marginally and you do see regular modifiers in the base game too to tide you over. I will likely be giving these Cats another visit...