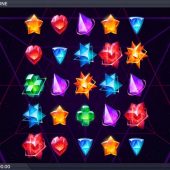 Dream Zone slot by Elk Studios has a futuristic theme with crystals and shapes over a dark background of dynamic straight-line patterns. Looks good if you like the Starburst slot graphics, or those of Play'n Go's cheap copy, Starblast slot. I would say this resembles Nextgen's much better StarMania slot and like that game this hints of quite some potential for large wins. So will getting in the zone here prove to be a dream for our bankroll?

We have a 5x5 grid of 25 tiles on Dream Zone slot with any 3 or more adjacent symbols paying a win. The pays are ranged from 3-of-a-kind right up to 11+. there are high symbols which are larger 3D crystal shapes and they have an equivalent colour low-paying simple shape. Red pays 100x bet for 11+ and 1x for 3, Orange or Green 40/0.5x, Blue or Purple 20/0.4x. For lower values, 11+ Red is 6x and for 3 is 0.3x, Orange or Green 5/0.2x and finally Blue or Purple 48/0.2x. Winning symbols are removed but not replaced, with remaining ones falling down their columns to the lowest position. There are no Wilds here as standard but they can be created as every single win earns you one of four modifiers.

Each win will create one modifier to help the run continue because to trigger the feature you must totally clear the grid!
Wilds - adds up to 5 Wilds over remaining tiles.
Symbol Upgrade - upgrades a low win symbol to the equivalent colour high one.
Symbol Scatters - A randomly selected symbol will pay scattered.
Symbol Explode - removes up to 4 single symbols.

If you clear the grid you will get 3 Bonus Drops. Each one begins with a new grid and from 1 to 4 Dream Features on the left of the grid shown as a purple ring. You still get Dream Features added for each win but unlike the base game if you don't win on the first action of the Bonus Drop you can call on those stored on the left to be activated instead. You get paid at 2x and if you clear the first grid, the next one is at 4x, then the next at 8x, 16x and so-on with 512x possible. The top pay appears to be 2500x here, so not as volatile as some slots.

Dream Zone slot is fast-moving, colourful nonsense in my opinion. Good graphics, sounds and animations as you always get from Elk Studios plus a 96.00% RTP. It's not too hard to clear the grid and get the bonus drops but these seldom pay much, over 100x would be a good result from my experience but then again the frequency of them is relatively high. The base game isn't that interesting and soon had me losing interest with higher wins seeming to be nearly impossible. I'm not sure what this game is trying to be, another grid game like Moon Princess or an enhanced Starburst. Whichever, I wont be dreaming about visiting this zone again...