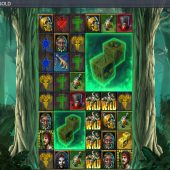 Voodoo Gold slot by Elk Studios is a creepy looking game with the grid over a jungle with a wooden hunting tower set back in the gloom of the tree canopy. The music is guitar based with a US Delta Blues riff and the symbolism is distinctly disturbing as befits the theme. Voodoo slots aren't many in quantity with Netent's Voodoo Vibes being a golden oldie and we tend to get more vampires for our horror in Europe with games like Blood Suckers 2 and for the properly scary iSoftBet's Paranormal Activity. So will the voodoo dolls here give us their gold, or will they be sticking pins in our bankroll?

Each win raises the rows by 1 up to a maximum of 8 rows for 4 consecutive winning actions on any game. When 8 rows are opened up you are playing 262,144-ways at best and the block symbols can only land on reels 2 to 6. These will only come in after an initial win when the reels are increased to 5 rows and therefore it's possible they will land on gaps where winning tiles have been removed. When they do, those positions underneath turn Wild and remain Wild until the winning actions end.

A single Bonus Bomb may appear and when it does it will explode away surrounding symbols in a large diamond pattern. If 2 appear then the Dual Bomb feature occurs which explodes the symbols in a straight line between the bombs and wherever else on the grid those exploded symbols occur.

3 or more Green Bonus symbols award free falls. You get 6, 9, 12 or 15 for 3, 4, 5 or 6 scatters respectively and retriggers can occur. During these free falls any Wilds created will sink to the bottom of their column and remain sticky for the duration of the falls and the extra rows created by wins will freeze too and not reset between spins as they do in the base game. This feature is quite volatile and can pay many thousands times stake, so be warned!

Voodoo Gold slot is a fine game with a superbly executed theme, crisp graphics and good sounds and animations that won't tire the player. The slot is fun to watch with those reels growing and the block symbols appearing to create the Wilds and you can do well in the base game too here. The RTP is 96.10% with the free falls being spectacular to behold especially in the latter stages when Wilds have stacked up on a few reels almost guaranteeing a series of big wins. Voodoo Gold slot certainly cast a spell on me...