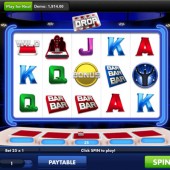 If you live in the UK and are an avid television addict you’ll know all about Endemol’s The Million Pound Drop, a gameshow from the same makers of Deal or No Deal and reality series Big Brother. If you’re scratching your head wondering what all the fuss is about, let’s fill you in: basically, the idea is for contestants to make it to the end of the show with as much cash left over from an initial million pounds as possible. Players answer multiple-choice questions and stake a portion of their cash on answers. If they get an answer correct they keep the cash they placed on that answer. If they get an answer wrong then any money placed on it will drop and be lossed.

On the Reels...
The reels on this 5 reel, 20 payline mobile slot are full of images from the show, including the show’s logo, cash, a typical contestant, regular 10-through-Ace symbols and Bar symbols. The Wild symbol substitutes for all regular symbols other than the game’s bonuses plus the Golden Wild symbol. That Golden Wild, when appearing on reel 3, turns four other symbols on the reels Wild too.

Click the Cash to Win in the Security Pass Bonus
The bonus rounds are rich and engaging. First is the Security Pass game, triggered by three Security Pass Scatters on reels 2, 3 and 4. You’ll be transported to the Money Drop cylinder from the show, with bundles of cash falling from the sky. Click on as many as you can to earn yourself as many free spins as you can, together with a multiplier. This can really accumulate into tonnes of free spins, and the Golden Wilds also count during those freebies.

Win Big in the Money Drop Bonus
Three game logo symbols on reels 1, 3 and 5 triggers the Money Drop Bonus. You’ll get to play eight rounds of the game, first betting some of your cash on a series of four trapdoors, then three trapdoors, and finally two trapdoors. Once the cash is placed, you click on ‘Drop’ to see which trapdoors will open. Choose poorly and your cash is gone. Choose well, however, and you will accumulate more winnings. As in the TV show, the aim is to keep as much cash as possible at the end of each round.

Our View...
Endemol have the luxury of owning the rights to the shows they’re converting into slots, and Million Pound Drop is the latest in a line of successful adaptations. Their TV tie-in slot, Deal or No Deal, has converted over to mobiles pretty effectively, and if you’re in the mood for more games on your phone, check out the mobile slot, Monopoly: Dream Life from IGT, which captures the excitement of the board game pretty well.