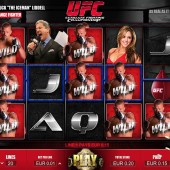 Betting is as hefty as the fighters on display here, with a top bet of $500 per spin on offer if your wallet will allow it.

Before you can start gambling, however, you’ll have to choose a fighter to help you along the reels. Choose from one of 12 different fighters (I plumped immediately for Georges St. Pierre, and he seemed to do me fine) and he will act as your own personal Wild during spins, substituting for all regular symbols other than the bonus Scatters.

Be Prepared! There's an Expanding Wild!

There’s a second Wild to look out for – the Golden Wild – which appears on the central reel to trigger an Expanding Wild feature. At random, four other symbols will disappear and be replaced with a normal Wild. The Golden Wild itself will then turn Wild too.

On the reels, as well as your fighter, there are plenty of symbols to put even the most jaded UFC fan in his comfort zone: the UFC logo, a couple of hot ring girls, the MC, a golden belt, the ring itself, and all with a nice guitar riff every time the reels spin.

Look out for the Fist symbol, as three of those on reels 2, 3 and 4 will trigger the Training Bonus round. Your chosen fighter (go, GSP!) will go up against another fighter in a kind of Top Trumps-style contest, pitting each one against the other on ability and strength. Simply choose a card to find out who you’re fighting, and let battle commence. You’ll earn free spins after each fight, with bonus spins awarded if you win a bout.

Cash Prizes Up for Grabs in the Big Fight Bonus

Three UFC Belt icons on reels 1, 3 and 5 triggers the Big Fight Bonus round. Again you’ll be represented by your chosen fighter – depicted in nice photo-realistic animation – as he takes on an opponent in an arcade-style game. Look to the bottom of the screen where you can choose moves for your fighter and his bout opponent. Depending on the outcome of the fight, you’ll win various cash prizes.

In terms of an accurate UFC adaptation, Endemol have made a fairly good fist of things, if you’ll pardon the pun. It’s obvious this is a big-money tie-in, and it’s good they’ve included a little bit of interaction where you can choose your own favorite to help you on to big wins. The bonuses are ok, if unspectacular, and the betting deliberately caters for all pockets.

Fighting slots are legion, and this is a good chance to recommend Fisticuffs, the old-school boxing video slot from leading developer, NetEnt – it counts as the perfect foil to this slicker offering.