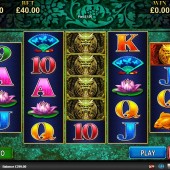 Slots developer Konami Gaming might have garnered their reputation from developing console computer games but they are fast developing an equally commanding reputation in the online slots industry with a number of top drawer slots that have been added to their portfolio of titles having already successfully left their mark on the land-based slots market.

Ancient Dragon is a 5 reel, 100 payline slot that has an oriental theme. The reels have the developer's trademark Konxion 4-5-5-5-4 layout. Fans of Konami slots will have already experienced this reels layout in the North American-themed Full Moon Diamond slot.

Symbols on the reels include a number of typical images from the Far East such as water lilies, turtles, goldfish, and the regular 9-through-to-Ace symbols. The Ancient Dragon statue acts as the Wild and can substitute for all other symbols, except for the Scatters, to help you create more winning combinations.

This slot also comes with Action Stacked Symbols, something already seen by players in Konami Gaming's debut online release China Shores, and this is when each reel holds a number of adjacent positions that are replaced at random by one of the regular symbols on the reels. This does not include Wilds but the possibility of swapping symbols allows you more opportunities to hit winning combinations.

Ancient Dragon is not a slot that will rock the foundations of the slots industry by any means but it does exactly what Konami Gaming want it to do. It builds on the positive feedback their first few slots launched on the online market have received. It includes the Konxion reel layout and the Action Stacked Symbols further emphasizing their use in Konami slots. I've been thoroughly impressed by the slots from Konami Gaming so far and this slot only further consolidates their new-found role as one of the most exciting developers on the market.