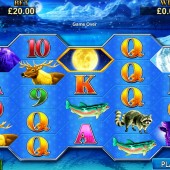 If I had to come up with a slot name including the most commonly used terms in already-released slots titles then Konami Gaming's release of Full Moon Diamond would have to come fairly close to the title I would come up with.

Just to name two examples, there is Ash Gaming's werewolf-themed Full Moon Fortunes that has two out of the three title words shared with Full Moon Diamond. Then there is the other Konami Gaming slots release of African Diamond that sounds very similar. Not to mention the array of other slots that have one or more of the words “full”, “moon”, or “diamond” in them. Come on Konami... you're better than that!

The theme of Full Moon Diamond is what you would expect. It has a similar feel to that of Wolf Moon from Aristocrat. The symbols on the reels are made up of different animals you would associate with North America such as a moose, a raccoon, a buffalo, and a wolf.

The Diamond is Wild
The diamond symbol acts as the Wild but it only appears on reels 2, 3, and 4. It does have the ability to substitute for all other symbols, except for the full moon Scatters, which helps you to try and complete winning combinations.

This slot's creative dynamism does not stop with the reel layout. It also comes with a Mirror Reels feature. This is essentially a free spins bonus round that is triggered when you hit three or more full moon Scatters across the reels. You can win up to 25 free spins when this feature is triggered. What makes this free spins bonus round different is that the reels spin mirroring each other on each free spin. When you press spin on each free spin, the first and fifth reels will spin together and land on the same symbols. Then the second and fourth reels will spin together and land on the same symbols. It is then left to the decisive middle reel that spins on its own to try and complete winning combinations.

Full Moon Diamond surprised me, I'll be honest. I saw the title and I thought “here we go, another run-of-the-mill slot with your standard features”. I could not have been more wrong. Everything from the layout of the reels, to the Mirror Reels in the free spins bonus round, and onto the non-stop action you encounter on the reels even in the base game. I loved it. Konami Gaming is fast catching up with the pack when it comes to online slots. More of the same please Konami!