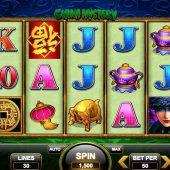 China Mystery slot is a game that many land based casino dwellers will be very familiar with. It can be found in gaming venues all over the world. Thanks to the development of online slots this popular Far East-themed title is also available online. Simplistic icons and basic reel sounds make China Mystery less exciting than many popular online slots like Bonanza from Big Time Gaming or Microgaming’s Phantom of The Opera. However, what it lacks in audio and visuals it makes up for in game play and potential rewards, as I will explain.

An array of Chinese symbols greet us on this 5 reel, 3 row, 30 payline slot. Topping the lot is the Red Script with Chinese writing on - paying a handsome 1000 coins for 5-of-a-kind (5OAK). Followed by the golden tortoise at 500 coins for a 5OAK and then urn and lantern paying 250 coins each. The remaining positions are filled with A-K-Q-J-10-9 paying anywhere between 150 - 100 coins for a 5OAK.

Lets not forget the Wilds, found on reels 2, 3, 4 and 5 and will substitute for any symbol in the game. There is also the bonus scatter (Golden inscribed wheel), which needs to appear on adjacent reels from the furthest left reel to play any part.

China Mystery, like other Konami slots such as Lotus Land and Gypsy Fire, this game has Action Stacked Symbols. This is where each reel contains a number of adjacent positions that are replaced with selected symbols before the reel spin is initiated. The benefit to you as a player is all replacement positions are filled with the same symbol, potentially creating more winning chances.

Land 3, 4 or 5 bonus scatters on adjacent reels from the left most reel and you will activate the free spins feature. You will be rewarded with between 8 -15 free spins with all wins picking up a 2x multiplier during the feature. The feature can be retriggered at any time during the free spins.

China Mystery has the look and feel of a typical slot machine you would find in land based. It’s very similar to Play’n Go’s slot Golden Legend, but there are so many Oriental-themed slots online that it could be compared with. With an RTP of 96.10% you could be tempted by this fairly volatile slot. However, this one takes time to grow on you, lacking the razzmatazz of more graphically rich games. This doesn’t bother me in the slightest though, as the winning potential is what I am in for and that’s why I am going to be coming back to solve this mystery.