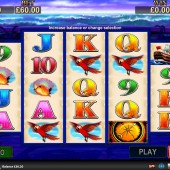 As part of a double release at the start of 2015 with the Far East-themed Ancient Dragon slot, Konami Gaming has launched this 5 reel, 100 payline ode to British maritime history called Treasure Voyage.

Treasure Voyage comes with Konami's innovative Konxion 4-5-5-5-4 layout which is based on interconnecting hexagonal-shaped reel symbols. Adjacent symbols are then allowed to create winning combinations with the chance for more wins up for grabs. This is a reel layout that Konami appears to be including in a large percentage of its slots and, to be honest, I am a fan. It is something different, it seemingly benefits the player slightly compared to the standard reels we are served up and long may Konami continue to use them.

Symbols on the reels will have fans of Treasure Island and Master and Commander jumping for joy. You will find numerous nautical-themed symbols such as tropical fish, killer whale, parrot, and 9-through-to-Ace symbols across the reels.

The Wild symbol is represented by the ship's captain. He substitutes for all other symbols, except for the Scatters, to complete winning combinations and ensure you earn a decent payout when he is involved.

Those of you that have played Konami's African Diamond slot will also be familiar with the Action Stacked Symbols feature. This is a feature that has become synonymous with Konami's slots over the past few months. On every reel, there are a number of adjacent positions that are replaced at random with one of the regular symbols. Wilds are not included as one of the symbols that can act as a replacement but the increased chance of hitting winning combinations with the regular symbols acting as Action Stacked Symbols more than makes up for that.

Nudge, Nudge, 12 Free Spins to be Won!
The compass symbol acts as the Scatter and you will need three of these to trigger the free spins bonus round. You will initially be awarded 12 free spins. These are no ordinary free spins. The captain Wild can appear on the reels during a free spin and nudge other symbols down the reels to create the potential of you triggering an all Wild reel.

Treasure Voyage is a slot that could well be another big hit for Konami. At first, it appeared as though it would be a cardboard copy of Ancient Dragon as a lot of double releases can be. However, the nudging Wild in the free spins is a great inclusion and a feature like that can be a game-changer for a slot. At the moment, Konami Gaming can do no wrong with their slots. The bar has been set and Konami's challenge is now to keep the standard of their slots this high.