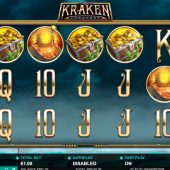 Kraken Conquest slot by Leander Games takes us to the world of Nordic legend, this time that of the undersea rather than Viking Gods. The theme has been done before by Play'n Go with their superb Eye of The Kraken game, with Novomatic's Sea Sirens and Play'n Go's Mermaid's Diamonds being others using the underwater legends. The reels here are transparent and are located over a choppy sea under a thundery sky with the powerful noises from the storm increasing when wins drop in. So how will we keep our bankroll out of reach from the tendrils of this Kraken?

A standard grid of 5 reels and 3 rows is where our 25 fixed pay lines lay and symbols appear single or doubled on the Kraken Conquest slot. The Kraken Wild is your best pay at 40x the 25-coin stake for 5-of-a-kind, then Diver 20x, Emerald 16X, Chest 12x, Wheel 8x and five card values of 4,3 or 2x for a line of 5. You will see a scale either side of our grid for the main two features, but firstly what can the Kraken do?

Lightning Strikes - the reels are hit by lightning to grant an instant cash prize.
Kraken Slap - the tentacles can reach up and slap reels to turn them Wild.

Kraken Cash Meter - each time a Tentacle Multiplier symbol appears on any of the middle reels, 2x for reel 2, 4x for reel 3 and 8x for reel 4, it's added to the meter on the right. When 8 are collected they are used in the Kraken Cash Bonus game where you do picks for cash, extra lives, hazards and advance level. There are up to 8 levels, so if you get to the end and beat the Kraken you get a special 188x bet prize on top.

Kraken Eye scatters 1,3 and 5 trigger 8 spins, or getting them via the Bonus Boost above. You start on 2x and any 2-scatter spin increases the multiplier by 1x to a maximum of 8x. Three scatters retriggers the 8 spins. You can still get the Kraken Slap Wild reels in the free games.

Kraken Conquest slot is action packed and the sounds and animations are excellent, with the combination of random features, cumulative features and triggered free spins seldom found all on one game. There is some potential here though you'll not get those multi-thousand times bet wins you can on other slots but that's not what this one is about. The RTP is 95.96% so that's around average for most slots nowadays and the free games are quite regular but also volatile - you really need the retriggers here! The cumulative features are good but take a while to collect so it's just as well the modifiers help us in the base game. You really should try and conquer this Kraken when you get the opportunity...