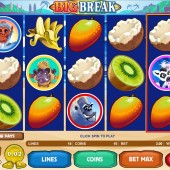 If you're looking for a slice of totally tropical excitement on the reels, you're pretty spoiled for choice: Microgaming's totally amazing progressive jackpot slot, the jungle-themed Big Kahuna and the exotic thrills of Mega Moolah will have you dancing on the bed in your socks - if you can hit that big jackpot, that is.

Kiwi fruits, mangoes, bananas, passion fruit and surfing monkeys - yep, all are present and correct on the reels in this 15 pay-line game, also from slot developer Microgaming. Making up the numbers are five types of mischievous primates, including a gorilla and a cheeky chimpanzee. Keep an eye out for all those animals because you can win some pay out combinations by hitting three or more of them across the reels.

Not One, but Two Wilds!

Big Break has not one, but two Wilds: first, look out for the Lucky Break sign - it pays a 2x multiplier on all winnings it helps form as well as substituting for all regular symbols in the game. However, it only appears on reel 5, which slightly puts a dent in any optimism you may have had. Secondly, the Big Break surf icon acts as a normal Wild, but only substitutes for the monkey icons, not the fruit.

Pick a Surfin' Monkey to Win a Prize

There's a special reason there are so many primate icons in this game. Hitting five different kinds on the reels triggers a bonus cash 'Surf's Up' round where the monkeys show off their surf skills. Pick a monkey to go surfin' and let him do his stuff on the breakers. Rad, dude!

Earn up to 15 Free Spins

For free spins hounds, there are 15 to be won by hitting 3, 4, or 5 Munky Wax symbols anywhere on the reels. Free spins can be re-triggered and you can also benefit from the monkeys acting as bonus Scatters during the round.

There's no doubt that Big Break packs a punch in the bonus stakes. It may not quite carry the thrills of the progressive jackpots that the games we mentioned at the top of the review possess, but nevertheless it has tonnes of color and bags of character. Hit yourself a gnarley breaker and catch a rad tube today (and apologies for the pathetic surfer's parlance...)