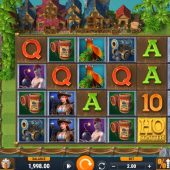 Boom Pirates slot by Microgaming is a Foxium production and when we open the game up we can see blanks by the reels which must mean there is room for expansion of the grid later on. Some gentle seafaring music plays which speeds up when a win appears and we have the reels set over a green island within the sea, the pirate ship at anchor by the side. Pirate themes are popular lately when we consider that the awful Red Tiger game Piggy Pirates was released a few months previous, followed by their much better Pirates’ Plenty Battle For Gold and the last one before this being the equally decent Yggdrasil slot Pirates Smuggler’s Paradise. So will these pirates make it a boom or bust for our bankroll?

The initial grid is 5 reels of 4 rows each on Boom Pirates slot with no fixed lines as we have a 1024-way set-up here. Symbols can appear stacked and the 5-of-a-kind pays are as follows: Mary 5x bet, Ben 3x, Parrot 2x, Cannon 1.5x, Barrel 1.2x with five card values all paying 1x bet for a full way. These pays can be improved in the features as we get extra reels as we'll discover on this voyage. Scatters appear on reels 1, 3 and 5 but we don't have any Wilds here.

Boom Feature - randomly after a win the grid may expand after cannon fire to anywhere between it's present 1024-ways on 5 reels of 4 rows each and the maximum size of 9 reels of 6 rows each, or in other words 10,077,696-ways to win! You get an improved win if the new tiles have the winning symbols on them, otherwise the extra positions mean nothing.
Mary's Swashbuckling Attack - Mary may swing across the reels making at least one 5-of-a-kind win by changing symbols.
You have the choice of 'Foxify' and paying 50% extra stake to increase the frequency of the above modifiers.

Yes, 3 scatters on reels 1, 3 and 5 will spell this old pirate call out and award 10 free games. You can also buy them for 100x bet but with the recent UKGC edicts regarding feature purchases maybe not for much longer. From the outset cannon will fire as in the Boom Feature above and expand your grid by a reel, a row or both as the round progresses. You get 5 extra spins for 3 more scatters which now appear more when the reels are opened up, a bit like the bonus in Laser Fruit. Big win potential here as the pays can also now be 6 up to 9-of-a-kinds and the best of those is Mary at 25x bet for a single way of 9 symbols.

Boom Pirates slot isn't actually a bad game to play as it's not overly juvenile but can pay reasonable wins in the base game, especially when the random modifiers occur. The graphics, sounds and animations are not irritating after you play it for an extended period and you get a decent 96.19% RTP. The free spins may make you wait a while if not buying them but are good to watch and seldom pay those annoying 10x or less totals. You'd be very fortunate however to hit over 500x bet in the bonus so the boom here is not as loud as one might expect. If you're looking for a less-volatile Megaways-type slot, or in this case 'Wonder Ways' then join the crew of this ship...