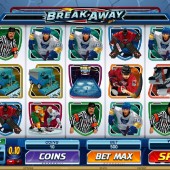 If Attacking Zones, Biscuits in the Basket, and Bottle Rockets leave you scratching your head, you’re probably not an ice hockey fan and Break Away, Microgaming’s sports-themed slot, will be one you’ll want to steer clear of. However, if you like lots of action, some nice animation and innovative Wild features galore, you should try burying your prejudices and give it a try.

In fact, there’s so much action in Break Away, I don’t even know where to start: is it the 243 ways to win system - so beloved of Microgaming - that can see your wins soar, the Rolling Reels contained within the game’s Free Spins feature, or the unique Smashing Wilds, which sees symbols smashed into oblivion by opposing hockey players to reveal winning combos?

Whatever, this 5 reel, 243 ways to win slot from the leading developer certainly knows how to turn it up to 11. The graphics and animation are top-drawer all the way. In fact, the game looks like it’s stepped straight out of a Vegas casino, so in-your-face it turns out to be. The reels are packed with ice hockey-related imagery, including sticks, ice skates, hockey rinks and masks, referees and flaming pucks, and even a Biscuit in a Basket (OK, maybe not that last one). The ‘Break Away’ logo is the game’s Wild, and appears on reels 2 to 4 as a Stacked Wild, giving you tonnes more chances to win big. The game boasts up to 40 of those bad boys on the reels at any one time.

Look out too for opposing hockey players. They appear at random to crash into the middle three reels and turn the whole reels Wild in the Smashing Wild feature. Massive wins will also follow as well as giving you a huge win.

The flaming puck is the game’s Scatter and awards you free spins when hitting three or more of them on the reels. Anything from 10 to 25 spins with a maximum 10x multiplier can be had, so it pays to hit as many of them as possible and go for the slam dunk (oh, that’s basketball, isn’t it? Oh well...)

If all that sounds like it’s going to get your adrenaline racing, wait for the final cherry on the cake. Microgaming have added their Rolling Reels feature to the game, meaning that winning combos disappear in an explosion of ice, allowing the symbols above to fall down and take their place.

For adrenaline junkies, there’s tonnes here to like. The betting is huge, the Wilds do just about everything Wilds can do in a game, and there are Rolling Reels and free spins to spice things up. Action fans who loved Microgaming’s video game-themed Tomb Raider: Secret of the Sword slot and assassin-themed Hitman slot, both of which featured some of the additions seen here, should get a kick out of this, while sports fans will warm to the ice hockey theme. For me it was a little too in your face, although I did like the very generous bonuses on show. And I know just a little bit more about Biscuits in the Basket than before I first played it.