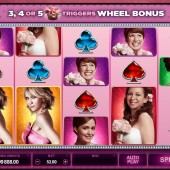 Bridesmaids was one of the biggest comedy smash hit movies of recent years when it was released back in 2011. Starring Kristen Wiig, Maya Rudolph, Rose Byrne, and Melissa McCarthy, the movie tells the story of two best friends whose relationship becomes strained in the run-up to the one friend's wedding.

Fortunately, the movie has now arrived on the slots platform thanks to world renowned developer Microgaming. It is a 5 reel, 40 payline slot that had a lot of publicity in the lead-up to its release and as soon as you load up the game you get the impression that it could well fulfil every bit of its stated potential. The fact you can win up to 105,000 coins in the jackpot really helps to get things off on the right foot.

The symbols on the reels include all your favourite characters from the film including Lillian, Annie, Helen, Megan, Rita, and Becca. There are also regular symbols that are represented by a blue club, green diamond, orange heart, and red spade. The only thing that is missing is Terry Crews as the fitness drill instructor.

This slot comes with Stacked Wilds that are represented by the Bridesmaids logo. If you hit five of these across the reels then you will earn a 900 coin prize which is a decent pay out. It is also a substitute for all other symbols on the reels, except for the cupcake Scatters, to complete any possible winning combinations across the reels on a single spin.

Find the Cupcakes to Trigger the Wheel Bonus

The second bonus feature is the Flying High Free Spins. Once again, you will be awarded 10 free spins but this time you will also be given Rolling Reels and Growing Wilds. The Rolling Reels have the power to reward multiple consecutive wins. The Growing Wilds can increase by 1 Wild every spin and can grow up to 13 Stacked Wilds.

Match the Bridesmaids to Win a Prize

The third bonus feature is the Boutique Bonus. If you've seen the film then you don't have to worry about Melissa McCarthy taking a massive number two in front of you on the reels! Here, you must simply match the different characters to win cash prizes and multipliers. The feature will only finish if you are unlucky enough to match Lillian.

The fourth and final bonus feature is the Magic Moments Bonus. You must select from a choice of memorable moments from the movie to win cash prizes. If you select a moment that reveals a carrot with the text “I'm Sorry” on it then the feature will come to an end. You can pick up to 10 magic moments.

Bridesmaids had a lot of hype before its release and Microgaming took a lot of criticism for releasing sub-standard slots such as Greek mythology-themed Hot as Hades slot. However, we have seen from slots such as the incredible The Dark Knight and the equally as phenomenal Terminator 2 that Microgaming do deliver when it comes to their branded titles. This is no different. The number of bonus features available to play is top drawer and the only criticism is that you have to go through the one Wheel Bonus to trigger them. Having them all available more easily would have been the icing on the wedding cake. However, overall, this is an impressive slot. They've merged the movie well into the reels with snippets of the film and quotes making their way in so it's not all just visual print. It has some extra dimensions to it than other branded slots. After such a long wait, I am pleased to say that Microgaming have not disappointed with this title.