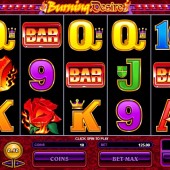 If ever there was a game that summed up a standard run-of-the-mill slot from online casino slot developer Microgaming then Burning Desire has to be it.

This 5 reel, 243 ways to win slot offers you the chance to win in a multitude of ways but does it set your loins on fire? Well, it has your standard Wild, every symbol acts as a Scatter and it has free spins so there’s enough here to get you playing but is it enough to keep you coming back for more.

I have to admit, when I first launched Burning Desire, I was not expecting much. The graphics look like they are a throw back from a 1990s video game and there weren’t any stand-out features. Ok, so it has 243 ways to win but if you rarely trigger those wins then it doesn’t really matter.

So I began to play with trepidation. I will say that I was pleasantly surprised. The lack of creative symbols made the visual side of things a bit boring and it felt like I was playing a classic slot. It’s hard to really see what angle Microgaming was going for with regards to its theme. Yes, it’s all about passion and desire but on the visual side there’s simply a burning rose, a burning bell, a burning 7 symbol and a Burning Desire logo symbol. It’s not the most creative effort I’ve seen from this usually accomplished developer.

The 243 ways to win means that every symbol technically acts as a Scatter giving you lots of chances to win. The Burning Desire logo symbol represents the Wild and substitutes for all symbols except for the Gold Coin symbol to complete winning combinations. You should beware that the Wild does only appear on reels 2 and 4.

As I said at the start of this review, Burning Desire isn’t groundbreaking. It will not set the world alight such as Microgaming’s millionaire-maker Mega Moolah and it certainly won’t get people talking like the highly-rated slot The Dark Knight Rises. However, it does have some appeal and if you like your standard, no frills slots then this could well be for you. I found it ok to play but I can’t say it will be at the top of my slots playing list.