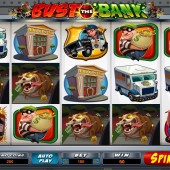 Well, if online slot developer Microgaming aren't exactly treading new ground with their crime-fueled romp, Bust the Bank, they're certainly trading on a tried-and-tested theme.
If Sheriff Gaming's 3D bank robbery slot, Piggy Bank, or Microgaming's other massively popular banker, Break da Bank Again, ever tickled your fancy, then this slot will too. A 5 reel video slot doing it 243 ways in classic Microgaming trademarked style, there's all manner of great things going on here, and the jackpot of $15,000 ain't bad, either.

On the reels we get plenty of alarm clocks, bombs about to go tick…tick…tick…boom, safes, bank signs, slavering guard dogs, cash vans, angry-looking security guards, our hapless bank robbers, Larry and Bob, and the key feature icon of a piggy bank. A nice, quirky soundtrack helps proceedings along in the background like an off cut from a Henry Mancini Pink Panther soundtrack.

Just like the riches that await our robber heroes inside the safe, this slot is full of goodies. The Bust the Bank logo is the Wild, substituting for all symbols except the bonus pig, the Scatter bomb or the safe.

The bomb symbol is the game's Scatter, and triggers the free spins round when three or more hit the reels. Eight spins are awarded to start things off, but hit the Scatter again during the bonus round and you'll get more freebies. Not only that, but during the free spins, reels 1 and 5 turn Wild!

Look out for the piggy on reel 3 - click on him to trigger the Piggy Bank Smash feature where he will release gold coins over the reels and into your bank account. We're not finished, though: the Safe Bonus logo appears on reels 1 and 5. Hit that, and a random award - anything from one to six - of coins will flood down the reels.

With Microgaming's 243 ways system, this slot will cost a bit to play, even when playing at the lowest stakes, but with plenty of free spins and bonuses helping you to bigger riches, it's definitely one for the adrenaline hounds.