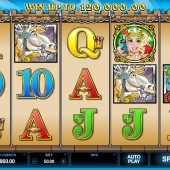 It appears to be a growing trend by experienced slots developer Microgaming to be as monotonous with their slots releases as they could possibly be. At first it looked like they would bulk launch the same type of slots in between big brand titles. However, now they're simply giving old titles the HD treatment.

One of those slots to receive an HD makeover is the medieval-themed 5 reel, 20 payline Chain Mail slot. The slot was originally released as a title that looked quite outdated and had graphics that would be more suited to a Commodore 64. This new updated version looks like it is now more appropriate for a Super NES. Admittedly, the 5 paylines have now been quadrupled, so that's a positive. There is also a 120,000 coin jackpot to be won!

The symbols on the reels are all medieval and look like cartoon parodies of icons you would expect to find in Microgaming's epic Avalon II slot. There is the princess (on her medieval mobile phone, of course!), cheesy knight in shining armour, the white stallion, the castle-shaped mail box that has a face, and the regular 10-through-to-Ace symbols. As you can see, there is the obvious play on words. Chain mail for the type of armour worn in medieval times and the fact that mail letters are included in the symbols. Very witty, Microgaming. Very witty.

The Chain Mail logo acts as the Wild on this slot. If you hit five of these symbols across the reels on a single spin then you can win up to 1,000 coins. They also substitute for all other symbols, except for the Scatters, to complete potential winning combinations. Any Wild wins achieved will also pay out a 2x multiplier.

Trigger up to 10 Free Spins with a 2x Multiplier

Scatters on the reels can be found in the shape of the “B” symbol. It can be assumed that the “B” stands for Bonus because if you hit three or more of them across the reels then you will trigger the Castle Bonus. This is a simple Pick 'em Bonus style feature. You must select a door in the castle to reveal a prize. You can reveal the Free Spins symbol to receive 10 free spins with a 2x multiplier or find the Princess symbol to win all prize values on that row of doors. You must avoid the angry king because if you find him then your picks will end and you will return to the base game.

Chain Mail is fairly uninspiring. The 120,000 coin jackpot is there as the big pull but your chances of triggering it are almost nil. If I am being honest, and brutal, this slot feels like a cheap cop out. They have taken what was a poor slot in its original form and simply tweaked a few aspects to try and make it seem more appealing. It isn't. The bonus feature is one dimensional. Even if you win the free spins or reveal the princess symbol then you won't win a game-changing sum. Ultimately, you're chasing insignificant wins. When you compare it to some of the better Microgaming slots such as the vampire-fest Immortal Romance or the dinosaur-filled Jurassic Park then you will certainly feel Microgaming have been a bit half arsed with this slot. Personally, I wouldn't waste your time.