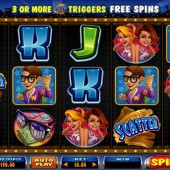 A wolf-themed slot. These things have prestige and the fact that slot developer Microgaming are behind this title has me getting a tingling in my loins that even a beautiful woman could not muster up. Ok, maybe I’m exaggerating there but I’m bloody excited!

Cool Wolf is a 5 reel, 243 ways to win slot and has a theme that you might initially think would follow the theme of IGT’s awesome Wild Wolf slot or the same developer’s Wolf Run slot. Alas, it is not! This theme is a bit more leftfield with a sort of Teen Wolf vibe to it except instead of an 80s soundtrack you’ve got a guitar rift that would not be out of place coming from the hands of Hank Marvin.

The symbols include the male form of the “Cool Wolf”, the lovely cheerleader ladies, the local Cineplex, a damn cool car, money, shades and coins and the regular Jack through to Ace symbols.

Get Your Ticket to 25 Free Spins!

The Scatters are represented by the Cineplex tickets and if you manage to hit three or more of these across the reels then you will trigger the free spins bonus round where you can earn up to 25 free spins instantly. Just as there is with the Football Star slot released at the same time as this title, the free spins come with the Rolling Reels feature. If you hit a winning combination then the symbols involved in that winning combination will explode, disappear and the symbols will all drop down to fill the gaps left and give you the chance to hit a winning combination again on the same spin. It is possible for you to hit a multiplier value up to 10x with the Rolling Reels feature.

There is one other bonus feature on this slot called the Howling Wild which is randomly triggered. If the “Cool Wolf” appears and swipes his claw down a reel then that reel will turn completely Wild increasing your chances of completing winning combinations.

Cool Wolf is a brilliant release from Microgaming and even though the graphics still feel a bit retro it is a very enjoyable slot. Fans of Da Vinci Diamonds Dual Play with its Tumbling Reels feature will feel right at home with the Rolling Reels feature and the free spins up for grabs ensure you won’t lose interest in playing this slot very quickly at all.