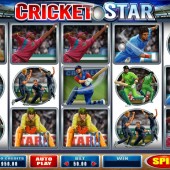 Transforming sports into a slot game has been a process that has troubled developers for a long time. There have been a number of attempts at it with gaming developer Microgaming coming closest to finding the winning formula with their Football Star slot.

The same developer is now at it again with their follow-up sports slot to Football Star and the ice hockey-themed Break Away in the form of this 5 reel, 243 ways-to-win Cricket Star slot. Personally, I find this a bit of a leftfield decision to go in this direction because if the football theme just about worked for them then why would they choose to go down the cricket route instead of a more globally dynamic sport such as American football, rugby, or Formula 1? Still, I am here to be proven wrong!

Cricket Star has the same lay out as Football Star, as you might expect. The footballers in different guises are replaced by cricketers in different guises. Even though the slot attempts to keep them fairly generic, you can tell that the cricketers appear to be players representing the major cricket playing nations such as England, Australia, Sri Lanka, India, Pakistan, and South Africa. There are cricketers bowling, batting, wicket keeping, taking wickets and there's also the umpire to keep things in check.

The Wild symbol is represented by the Cricket Star logo and will substitute for all other symbols, except for the Scatters, to help you complete any potential winning combinations that appear on the reels. They also appear as Stacked Wilds on reels 3, 4, and 5.

Earn up to 25 Free Spins with a 10x Multiplier

This slot comes with the popular Rolling Reels feature. This is where any winning symbols will disappear and the symbols above will roll down to replace those symbols that have disappeared with new symbols appearing from the top of the reels giving the potential for multiple consecutive wins.

Watch Out for the Wild Wickets Bonus

Also, when playing this slot, I was presented with the Wild Wickets Bonus. This feature is randomly triggered and this is where reels 2, 3, and 4 will turn completely Wild to give you a fantastic chance of hitting some big pay outs. Not a bad feature to have on a game.

Cricket Star is not a bad slot and it dispelled any initial concerns I had about it being another carbon copy slot of its predecessors. The Rolling Reels feature is always good to see and the Wild Wickets Bonus that can be randomly triggered will keep you on your toes. The only downside is that it is not the loosest of slots. The potential prizes are mouth-watering but in reality you're not too likely to trigger any big wins on a regular basis. However, in a way, that is what makes this slot so appealing. You always want most what you cannot have!