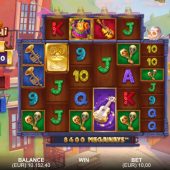 Dia Mariachi Megaways slot from Microgaming is developed by an in-house team, in this case All41 Studios, as have all MG Megaways have been. For example the most notable title, Break da Bank Again Megaways which was by Gameburger. We have many others under the Microgaming platform like 4 Diamond Blues MW and Forgotten Island MW which was by All41 too. We get the old Mexican theme here with frantic guitar music, sound effects from the region and much colour on the reels, no chilli to be seen for a change! So can we see some heat for our bankroll here or will it Dia out very fast?

On the reels...
All41 have made Dia Mariachi Megaways slot interesting and we get 6 reels of 2-7 symbols with a top scroll of 4 tiles resulting in 324-117649 ways to win. Wilds normally only appear on the top reel and gold scatters on all. Symbols can be stacked and the top 6-of-a-kind is the Purple Guitar at 50x bet, Red Violin 5x, Trumpet 2.5x, Maraccas 2x with six card values of 1.5 or 1x. Your top scroll gets 4 special symbols which can appear and if the Sombrero over their reel is lit and active they will each produce a modifier!

Special Symbols
Your 4 special modifier symbols are: a
Wheel - spin for one of 4 levels of static jackpots top prize 10,000x bet
Rocket - turns into a Wild then selects 3 other random positions on reels 2-6 to become Wilds too
Pinata - small cash awards of 2-10x bet
Firecracker - turns wild plus expands to the whole reel underneath

Free Games
You require 4 scatters to get 10 free games with +2 spins for each scatter over the 4. You can retrigger in the quantities. Your enhancement is perhaps predictable in that the 4 Sombreros above the middle four reels will always be lit therefore active which so any special symbol landing on the top scroll will activate its modifier. The maximum win is stated at 12,000x here.

Our View...
Dia Mariachi Megaways slot has a good factory RTP of 96.42% and isn't too bad as far as the base game is concerned due to the odd modifier that comes in under a Sombrero. There is a feature buy in some countries at 100x bet which indicates the kind of pay you can expect when you trigger the bonus, which can be an arduous process! That said, you will get a few modifiers via the special symbols, it just depends which one - the cash is rubbish, Wilds can help but the static jackpot wheel is the one with best potential. The sounds and music can be irritating after a while but the colours make it OK on the eyes which is the main thing. Be aware, you could get your cash into a prolonged Mexican stand-off here...