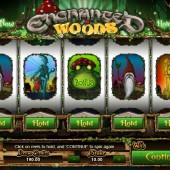 Here's an interesting one from leading developer, Microgaming: a fantasy-themed online slot (so far, so yeah whatever) with five reels (OK, still with you) but with one major difference: there's just one pay-line in the game.

Just the One Pay-Line!

Yep, that's right: there's just one pay-line active on the game. While it makes the game a little more interesting, it can be pretty frustrating if you don't hit anything.

Pixies, leprechauns, gnomes, blue and yellow fairies, imps, elves and toadstools - yes, you can be pretty sure this is a fantasy-themed game online. The blue fairy pays the biggest whack in the base game - 70 coins - and with a maximum bet of $100 that makes for a fairly nice jackpot.

The Wild in the game is the pink fairy, appears on only reels 2 and 4, and substitutes for all symbols other than the Scatter. The Scatter in this case is the Toad. When three Scatters forms a winning combo by landing anywhere on the one pay-line you will activate the 'Pick the Toad' bonus feature.

Pick a Toad, Kiss a Toad, Win a Prize

Essentially a Pick 'em bonus round, you have to choose from 10 toads on display. Pick three toads and hope that kissing these ugly gits reveals a few princely prize sums.

While one pay-line may not sound too clever, perhaps the game's best feature does. In Enchanted Woods there is a great Hold feature where any of the reels can be held after every other spin. Winning combos will automatically be held too, therefore giving you a nice chance to build on wins.

There's no doubting Enchanted Woods looks the business: the graphics are lush, the reels spin in a really slick manner, and the animation on winning combos is nice too.

While one pay-line may not sound too good to start with, the Hold feature - reminiscent of old-school AWP machines - is a lovely added touch. It's expensive to play, but get plenty of regular wins and you will soon make that outlay back.

If you're after more fantasy thrills, make a beeline for Cryptologic's panto-themed Enchanted Beans, while you can never go wrong with a slice of Betsoft Gaming class, and the magical Enchanted delivers it in spades.