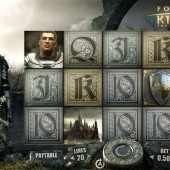 Slots developer Microgaming received a fair amount of criticism when it released a watered-down version of the smash hit HBO television series Game of Thrones in slot form so it does not come as any real surprise that the developer has followed that epic let-down with this Forsaken Kingdom – The Path of Valor slot.

Forsaken Kingdom – The Path of Valor is a 5 reel, 20 payline fantasy-themed slot that will immediately have fans of IGT's Dungeons and Dragons – Treasures of Icewind Dale and RTG's Orc vs Elf frothing at the mouth with excitement. Could this be the fantasy slot that every Microgaming fan has been dying to see get released since Lord of the Rings?

The symbols on the reels are very much reminiscent of a J.R.R. Tolkien or Robert Jordan novel with a King Arthur angle going on. In fact, the reels themselves are set against a moody backdrop with our noble King standing by in 3D form to watch on as you win big prizes. Symbols include a sword in a stone, King Arthur, his arch nemesis the black knight, Camelot, and the regular 10-through-to-Ace icons.

The Wild symbol is represented by Lady Guinevere and she will substitute for all other symbols, except for the Scatters, to complete any potential winning combinations. She only appears on reel 3 but has the ability to turn into an Expanding Wild if a winning combination is possible to trigger.

Earn Multipliers at the Round Table of Fortune

The shield acts as the Scatters on this slot and is the symbol you need to watch out for to trigger the bonus features. The first of these bonus features is the Round Table of Fortune Bonus. Every time you hit two Scatters on the reels one of the spaces on the round table that is located by the “spin” button on the reels will be filled. Fill all of these spaces at the round table and this bonus feature will begin. You will then be taken to a second screen where you will be presented with the round table and each seat holds a multiplier value. The table then spins and whichever multiplier value the marker lands on, you will earn that prize.

Finally, there are instant wins up for grabs if you manage to land King Arthur next to either the black knight or Lady Guinevere on the top row of the reels. Not one of the most creative bonus features included in a slot but nobody can bemoan an instant win.

Forsaken Kingdom – The Path to Valor is certainly a marked improvement on Microgaming's last King Arthur slot which was fun but stylistically ancient. The bonus features are superb but the question still remains over whether Microgaming allows enough pay outs on this slot. There are a lot of ways to earn some wins but if you are comparing it to the vampire-themed Immortal Romance then there is a stark difference. Still, it is a vast upgrade on Avalon II and Game of Thrones which is news that will certainly please a large number of slots fans.