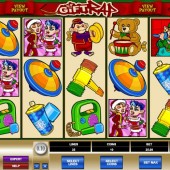 Ah, Microgaming, I see what you did there. Making a very bad pun on the word ‘Wrap’, and throwing in some, like, rappers, is the angle the big online developer have taken with their 5 reel, 25 pay-line slot, Gift Rap.

Set in a North Pole crib, Santa’s elves have been replaced by rapping pixies with chains and ear-rings. There’s no Santa himself, sadly – presumably he’s off popping caps in a reindeer's ass.

On the reels are some classic kids’ toys the elves may be busy making when they’re not keeping it real, like a plastic baby’s hammer, a spinning top, a toy bear, karaoke machine, and a mechanical cymbal-clashing monkey. There’s also an array of elf rappers (Public Elfemy? ElfInem? LL Cool Elf?) filling up the reels.

Look out for the Xmas bauble, as it acts as the Wild and substitutes for all regular symbols in the game other than the Bonus and Scatter. A can of snow spray is the Scatter, and while it doesn’t trigger any bonus rounds, it does pay an 80-coin jackpot when hitting five on the reels. The Jack-in-the-Box symbol – or Rappin’ Jack Frost, as he’s called here – triggers the Gift Grab Bonus when you hit three or more across the reels.

A maximum jackpot of 32,250 coins can be won in the bonus round, a basic Pick ‘Em Bonus feature where you have to choose from a selection of 30 boxes, either containing cash prizes or Jack Frost himself. If he appears, your go ends and you return to the base game.

Unfortunately, the spirit of Christmas wasn’t exactly with Microgaming when they came up with this game. The Pick ‘Em Bonus is Gift Rap’s only bonus feature, and while the theme is nice and quirky, and the graphics clean and cheery, there are probably better Christmas options out there. Try out Playtech’s own take on the Christmas Carol theme, Ghosts of Christmas, with its generous free spins bonus round, or the same developer's festive fun slot Santa Surprise.