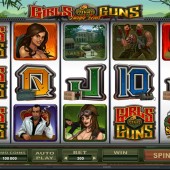 When I heard online casino slot developer Microgaming were about to launch a slot called Girls with Guns Jungle Heat I thought the creative marketing team had lost their mind.

Firstly, the biggest market for this type of kind of thing - North America, can't even play Microgaming slots for real money at present. There is also the stigma attached with such blatant use of male arousal (the guns probably being the biggest of those), which might have reflected badly on all involved. However, my concerns appear to be completely unfounded as the game has received a warm reception from players and online media in general.

If you are not familiar with the Girls with Guns following, it is a sub-genre of animated action films featuring scantily clad woman, who seem to all be fairly busty, armed with a range of powerful firearms. This slightly cult-ish group of protagonists have obviously hit a more mainstream audience with this new slot game.

I suppose I should talk a little about the actual slot, which for regular Microgaming slot players will seem a little bit like deja vu. If I am not mistaken it has the same game engine as the old Lord of the Rings slot (LoTR), which was taken offline back in 2012. This would make sense, as this probably took Microgaming a while to develop, so they probably didn't want to just throw it in the trash after LoTR was removed. The good news for players that this is a very good slot, which can be hugely rewarding when you hit something big.

There is a free spins bonus which is triggered when you land 3 or more scatters (confirm). This will release 15 free spins, with the possibility it may retrigger at any time. During the bonus the actual 'Girls with Guns' symbol may appear on the reels and will expand across the whole reel, turning wild. Land one of these in the right place with some of the game wilds and you could be in for some really big wins.

I like Girls with Guns Jungle Heat (I am talking about the slot here) mainly because I liked the old LoTR slot and this is almost the same game without Golum and the hobbits. In fact I would go as far to say that is the best thing I have seen from Microgaming in a while and that includes both the Dark Knight Batman slot and the sci-fi slot Battlestar Galactica. Those that never got to play LoTR will get the added treat of trying out a new game format, which is rare for Microgaming slots these days.