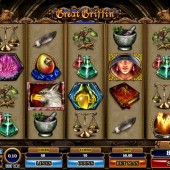 Of all the mythical mammal mash-ups, the Griffin has to be the coolest. A legendary creature made-up from the legs and body of a lion and the head and wings of an eagle, the Griffin combined features of the two most kick-ass creatures around.

I never understood why sorcerers conjuring up these wonderful creatures stopped at a Griffin, though. While they were at it, why didn’t they try something different, like a cross between a rabbit and a scorpion, a zebra and a giraffe, or even a tortoise and the December issue of Sports Illustrated. It will forever be one of those questions that will remain unanswered. I suppose at least we have the Griffin and for that we can be glad!

It’s the Griffin, though, that online casino slot developer Microgaming celebrate with this 5 reel, 50 pay-line slot that offers some beautiful graphics and fast action. On the reels are plenty of potions and plants, crystal balls, a mortar and pestle, scales for weighing ingredients and a Griffin egg with the baby’s beak poking through.

The Mythological Griffin is Great and Wild

The Griffin symbol is Wild and he substitutes for all symbols other than the Scatter. All wins are doubled when being formed by the Griffin. However, there’s another Griffin to look out for: the Griffin Wild Bonus happens at random as a superb animated bird/lion combo flies across the screen, turning certain symbols Wild. It’s a great feature and looks fantastic as well.

Win up to 15 Free Spins with a 3x Multiplier

Concoct a Potion to Win Prizes

There’s a final bonus feature to be won if you hit three Sorceress symbols on reels 2, 3 and 4. Essentially the bonus round is a straightforward Pick ‘em Bonus where you choose various potion ingredients to reveal a prize. You can also hit a ‘Pick Again’ symbol which gives you another chance, or a ‘Win All’ symbol (harder to hit) which gives you the biggest prizes on offer.

Fantasy-themed games lend themselves particularly well to online slots: there’s an endless stream of inspiration, imagery and scope for bonus rounds limited only by the designer’s imagination. That’s why Great Griffin has plenty of competition out there in Slotsworld.

It might be lazy to pick out Microgaming’s myth-themed Thunderstruck 2, and not just because of its popularity, but it really is the fantasy slot to end all fantasy slots. Elsewhere, IGT’s role-playing themed Dungeons & Dragons: Crystal Caverns offers enough magic and fantasy to sate the most magic and fantasy-starved slots fan.