Jason and the Golden Fleece slot 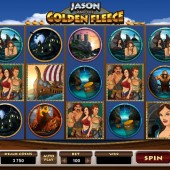 If there are two things to get online slots fans’ juices flowing, it’s mythology and bonus rounds. Luckily, slot developer Microgaming’s Jason and the Golden Fleece offers both in spades.

If you’re not up on your Greek myths, Jason was the ambitious young warrior who set sail with his merry band of Argonauts to hunt for ultimate power – the Golden Fleece. Along the way he was helped by a love-struck witch, Medea, who threw Jason’s pursuers off the scent with some well-timed decoys, such as murdering and chopping up her children. It is a pleasant tale that you might not want to save for telling your kids just before bedtime but an intriguing story nonetheless!

Fortunately, that little slice of Greek mythology has been left out of Microgaming’s 5 reel, 25 fixed pay-line slot, but other key figures of the story have been left on the reels in the form of nicely-rendered icons, such as Jason himself, his band of Argonauts, the Argo ship, Medea, the Cyclops, plus Chiron the Centaur, the Sirens, and Jason’s home of Iolcus.

Jason Can Earn You 10 Free Spins with a 3x Multiplier

Look out for the Jason logo, as it acts not only as the game’s Wild – substituting for all symbols other than the bonus symbol – but also the Scatter too. When acting as a Scatter, three or more logos across the reels triggers 10 free spins with a 3x multiplier. The free spins can be re-triggered, making it a great bonus to win, and there’s a potential 220,000-coin jackpot to be had.

Five Golden Fleece Scatters awards a top whack of 25,000x your bet, but getting just three of those fleeces will trigger a multi-layered bonus feature. Here you’ll get to help Jason along his journey, with six possible bonus rounds to play in until you hit your goal – the fleece. Hit the bonus trigger six times and you’ll get to play each round, so it pays to stick with playing the game for a good session.

First off there’s a standard Pick ‘em Bonus where you have to choose 6 shields from a choice of 12. Next, match symbols that the Harpie presents to you. You’ll either receive a cash prize or a multiplier bonus. Next, the Shipwrecked Argo will reveal a prize which you can keep or gamble to try and spin up.

A Wheel of Fortune round in Crete at the mighty giant of Talos sees you awarded five spins. Up to 20,000 coins can be won for this round. Next you come to face to face with the beautiful but deadly Sirens who present you with a straight High/Low card game. Each correct guess awards a prize; string four correct guesses together to win a nice little jackpot of 37,000 coins.

Finally, you reach Jason’s destination – Colchis – and the slumbering dragon protecting his prize. Choose potions to make the dragon sleep. The longer he sleeps, the more you win. If he wakes up before you snatch that fleece, your go ends and you’ll be sent back to the base game.

In terms of multi-layered bonus rounds, Jason and the Golden Fleece is hard to beat. The game was launched with much fanfare by Microgaming, and it’s easy to see why – it’s hard on the action and big on the rewards.

Obviously, Microgaming aren’t the only developers to layer on the bonus rounds. Playtech’s Egyptian-inspired The Mummy slot tie-in is great for a bonus round that offers almost every feature under the sun, while one of my favorites, Bally’s myth-inspired Cupid and Psyche, offers tonnes of action for mythology fans.