Journey of the Sun slot

Journey of the Sun slot review 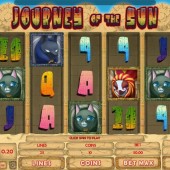 Egyptian-Themed with a Twist

The leading developer's Journey of the Sun takes a slightly different take on the ankhs and amulets range of slots you normally get by focusing on the cats of ancient Egypt. The Egyptians were hot for a bit of kitty action - being the first civilization to domesticate the moggy - and therefore were held in high regard. I've never been the biggest cat fan... evil little sh... anyway, if you love cats then I'm sure you'll fully understand where the Egyptians were coming from!

On the 5 reels in this 25 pay-line slot they take center stage, with the reels packed with four different feline symbols to go with some nice 9-through-Ace icons.

The Wild Is the Ankh... Unsurprisingly!

The Wild is the Ankh - OK, so maybe the ever-reliable developer Microgaming haven't entirely abandoned the classic Egyptian icons altogether - and it substitutes for all symbols other than the Scatters.

Play Senet to Win Prizes (Senet, not the Senate!)

The Scatter is the Journey of the Sun icon, and it pays out when appearing anywhere on the reels. Three or more Scatters triggers a bonus feature which is based on the Egyptian board game Senet (the Egyptians invented it just after developing Guess Who... possibly!). You don't really have to know how the game works, suffice to say putting your game pieces in the right places on the board is the key to earning the most cash.

You will be presented with a 3x10 grid of squares. Half the squares are light and half are dark. So, essentially it's a double Pick 'em bonus - pick a light square from 15 available, and one from the dark squares in order to determine free spins and a multiplier respectively.

The catty take on a classic theme doesn't particularly add anything to the world of slots, but Journey of the Sun is a typical slice of assured slots action from Microgaming.