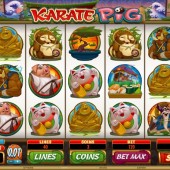 Ah, the memories of Daniel-san and Mr Miyagi will come flooding back as you read this slot title I am sure. The trouble is, I’m not too sure pigs would be very good with doing the whole wax on and wax off with their little piggy hooves. If this 5 reel, 40 pay-line slot from Microgaming is anything to go by they can still kick some serious ass though.

Come on, admit it, it’s a fantastic name and concept for a slot. We all laughed hard enough when The Simpsons movie introduced us to Spiderpig but Karate Pig? Great potential. Fortunately, this slot actually does well for itself.

There is plenty to keep you entertained in this slot. The first thing you will immediately want to keep an eye out for are the Karate Pig Wild symbols. If you hit five of these across the reels then you will win a 10,000 coin jackpot.

The symbols on the reels consist of characters that are relevant to the Karate Kid-inspired story. There is the wise mentor, the love interest, the arch rival and the epic sight of a bonsai tree.

Karate Pig comes with a free spins bonus round that is triggered when you hit two Gold Coin symbols on reels 1 and 5 at the same time. You will be rewarded with 15 free spins and a multiplier value of 2x. There is the potential to win up to £80,000 in this free spins bonus round so it is certainly a bonus feature that could pay out huge winnings.

There is also the exciting Karate Pig Bonus feature. This is triggered if you hit three or more Bonus Pig symbols across the reels. You are then given the choice of playing either the Pork Chop Bonus or the Hammer Bonus. Whichever bonus you select, you will then be taken to a Pick ‘Em Bonus style feature where you must select certain objects to reveal a prize.

Karate Pig is a slot that got me interested from the very start. Microgaming knows how to produce top slots with slots such as the scientific Dr Watts Up, the multi-million dollar maker Mega Moolah and the recently released The Dark Knight Rises just a few examples of the standard of slot they can release. This is another slot Microgaming can be proud of.