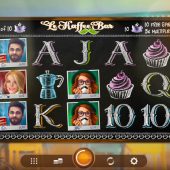 Le Kaffee Bar slot by Microgaming is further evidence of the decline of this once famous developer along with their reputation for great 243-ways slots. To be fair, the excuse here can be palmed off to the in-house developer All41 Studios but Microgaming's fans will be disappointed possibly nevertheless. The grid is set naturally enough over a continental and very chic coffee house with dark reels and relevant symbols although the characters may seem slightly odd as we'll see. Coffee and slots do go together as we saw with Merkur's Coffee House Mystery, with a posh brew on MG's rather better Finer Reels of Life and of course for the real foodies, Real Deal Diner. So will this Kaffee Bar give our bankroll a caffeine boost?

Le Kaffee Bar slot gives us 243 ways over 5 reels of 3 rows with single symbols although you can see two on any one reel and the 3 characters may appear fully-stacked on the centre reels. We play to some jaunty music with soundbites from the main characters when we see a winning spin, for which the cost is 30 coins. There are 3 main characters all paying 10x bet for 5-of-a-kind, the Hipster Man, Blonde Woman and Woman with the Moustache (yes, really!) so we have most genders covered here. The Cupcake and Coffee jug are 8x each with six card values paying 7, 5 and 3x each as they descend in value. You won't see standard Wilds but they can be created, and Cup scatters appear on reels 1 and 5.

Any 3-of-a-kind wins or full reel of characters will create a Wild Coffee Beans symbol in the centre and you'll get a respin with the Wild only held in place. You get another respin if another Wild is created as result in a different position, and so-on. The Wilds only occur if the win is on the same row by the way!

You collect Cup scatters on reels 1 and 5 only for these. You have a meter of 30 cups below the grid and if you fill 10 you can collect 10 free spins at 3x. If you wait until collecting 20, take 15 spins at 4x or if you want the ultimate wait for 30 whereupon you auto-collect the maximum 20 spins at 5x. No retriggers but with the low volatility of the base game I wouldn't expect much refreshment here however long you leave them to build up.

Le Kaffee Bar slot is tame old rubbish with a 96.35% RTP and a penchant for making your balance last forever while never letting you win much. The Wild Spin Again feature is wearing after a few times, especially as it pays little or nothing in most cases and slows the game down. The game looks OK but the annoying soundbites from the male character may make you want to hit something after your first hundred spins or so. If you stick it out for the cumulative free spins trigger, you could theoretically win a few hundred times bet but I wouldn't wait until you do. By then your coffee will have gone cold, the cakes will be stale and you'll be heading for MacDonald's instead...

Eye of the Storm slot