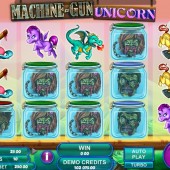 Now and again, along comes a slot game that really leaves you lost for words. Slots developer Genesis Gaming have used the Microgaming Quickfire platform to launch the bizarrely unique Machine-Gun Unicorn slot. A lot of excitement preceded its release as it was a finalist in the 2015 ICE Game to Watch competition.

Machine-Gun Unicorn is a 5 reel, 10 payline slot that pays both ways and will immediately give you a mixture of emotions. When I loaded up the game I instantly felt excited, confused, astonished, and a little bit scared by what I saw on the reels.

The slot basically tells the tale of how the unicorns were driven to the verge of extinction by a horde of zombies. Just as things looked to be over for the mythical creatures, a hero came from the midst to save them. That hero was Machine-Gun Unicorn!

The symbols on the reels include three different decapitated zombie heads that are in glass jars, a purple unicorn, pink unicorn, green dragon, and a yellow unicorn. There are no regular 9-through-to-Ace symbols which adds some welcome variety to the reels.

The Wild symbol is represented by the hero Machine-Gun Unicorn. It has the power to substitute for all other symbols to complete winning combinations. It only appears on reel 3 so be sure to keep an eye out for it.

Unfortunately, despite the huge promise this slot has in terms of its theme and plot, it does slightly falter in the fact that there is only one bonus feature and that is the Symbol Bombs feature. If the Machine-Gun Unicorn Wild lands on reel 3 on any spin then it will fire at all the zombie heads in jars symbols that are also on the reels. Each exploding zombie head in a jar will reward a cash prize. If there are no zombie heads in jars on the reels when the Machine-Gun Unicorn lands on reel 3 then you will be awarded a special consolation credit prize. All wins are multiplied by the total wager placed by you as the player.

Machine-Gun Unicorn is a very innovative slot in terms of the angle they go for. I loved the story behind it and could not wait to get started. However, the actual slot is very shallow. The single bonus feature can deliver some decent-sized wins but it just gets repetitive and after a few low pay outs you begin to really feel the frustration. The story is cool, the graphics are beautiful, but the game play is monotonous after a short time. If you love your zombies in slots then Zombie Rush from Leander Games is a really enjoyable title and if you are a fan of unicorns in slots then you might want to give Enchanted Unicorn slot from IGT a spin. 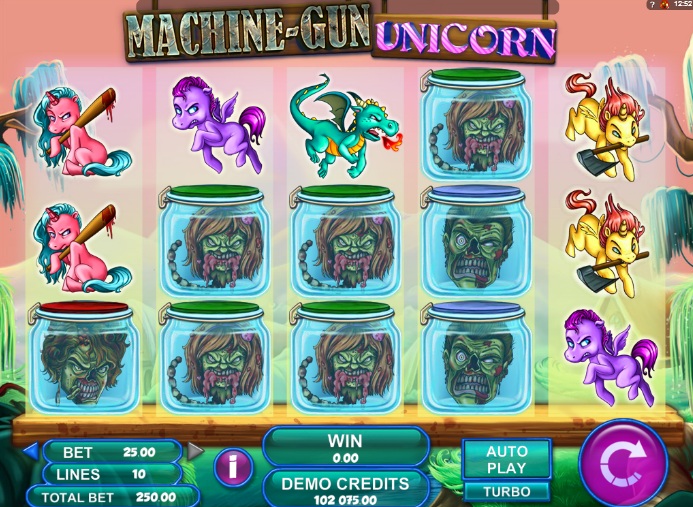