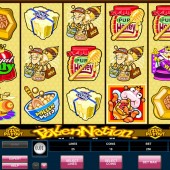 If you marveled at the 3D joys of Sheriff Gaming’s insect-themed slot, One Million Ants, you’ll probably want to steer clear of this slot, Pollen Nation.

Slot developer Microgaming’s addition to the ‘B’ list – or should that be ‘Bee List’ – takes a similar classic slots take on things, and firmly belongs in the file marked, ‘basic’, along with their other efforts like the foodie-themed Munchkins.

Pollen Nation is a 25 pay-line, 5 reel slot full of colors and basic animation. The reels are packed with bee-related hijinks like a jar of honey, royal jelly, a bowl of ‘Pollen Puffs’ cereal, some honeycomb, some beeswax (are we running out of bee-related icons yet?), a bee guard and soldier, plus a bee doctor and of course, the Queen Bee.

The Wild is the Queen Bee, as you’d probably expect, and she pays up to 60,000 coins if you hit five across the reels. She substitutes for all symbols other than the Scatter.

Pick Your Prize in the Babee Bonus

The Babee Bonus is triggered by hitting three or more Babees icons on the reels anywhere, where a 32,500-coin bonus can be yours. It’s basically a Pick ‘em Bonus kind of game, and your mission is choose chunks of honeycomb to fill up the babee bottle with. Keep picking cash amounts until you hit the STOP button.

Add Some Sting with Expert Mode

Like other Microgaming slots in this bracket, there’s an Expert Mode so you can load up the Autospins, but other than that there are few thrills to build up the ‘buzz’ in Pollen Nation. A 60,000-coin jackpot certainly beefs up proceedings but the bonus round is fairly average when compared with most of Microgaming’s other output.

Fans of no-nonsense video slots should get a kick out of the simple gameplay on offer, but for me, I’ll stick to the 3D joys of the insect-related slots I outlined at the top of the review or the Sheriff Gaming's cute take on all things 6-legged, Bugs.