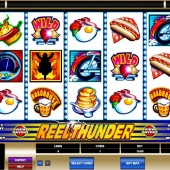 So Popular It Went Mobile

Reel Thunder is a 5 reel, 9 pay-line slot that has proved so popular that online developer Microgaming has decided to release this title on its innovative HTML5 format so that mobile players can enjoy this slot when on the move. At the time of its mobile release, Microgaming only had 40 mobile titles in its mobile portfolio so they were keen to get Reel Thunder onto the HTML5 format sooner rather than later.

The symbols on the reels have a sense of comic genius about them with a cartoon hog biker as the main character. The other symbols consist of things you might associate with the Hells Angels including a beer, a license plate that says “cruisin”, a hot dog, a chilli and various parts of a motorcycle.

The Wild is Wild!

The Wild symbol is, unsurprisingly, represented by the Wild icon and substitutes for all other symbols except for the Scatters so there are some nice little payouts that can be won when you hit the Wilds on the reels.

The Scatter symbol acts as the Scatter, again unsurprisingly, and where as all wins pay left to right, wins that involve the Scatters pay in any direction opening up the possibility of a lot more wins.

Unfortunately, there are no free spins or bonus features in Reel Thunder but this is a slot that thrives on its simplicity. Microgaming are great at delivering slots that offer fun gaming without complex bonus features. Their previous releases such as the chaotic Cashapillar slot and the popular The Dark Knight slot shows the versatility that Microgaming possess when releasing their slots. Reel Thunder might not appear to be a superb release at first glance but the vast chances of winning make this a slot that needs little thinking but will still keep you glued to the edge of your seat.