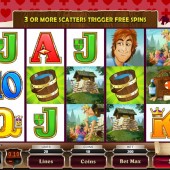 My only experience of slot developer Microgaming's Rhyming Reels slots portfolio up till now has been Georgie Porgie - a slot based on the schoolboy who kissed the girls and made them cry (before being issued by the courts with a harassment order).

That slot was a good-natured slice of nursery rhyme-themed mayhem, and Jack and Jill pretty much follows suit.

Played out over 5 reels and 20 pay-lines, Rhyming Reels: Jack and Jill recounts the nursery rhyme about a couple who go up the hill to fetch a pail of water. Jack - after one too many Jaegerbombs - falls down and breaks his crown, with Jill following after. In this slot, however, Jack is a chisel-jawed yokel and Jill a buxom temptress who seems to have made Jack fall over by whipping off her top. Modern slots, eh?

Anyway, with the level of sauciness you'd expect the reels to be light of touch and fun to look at. And so it is here. The graphics are rendered in lovely cartoon graphics, with Jack 'n' Jill - and Jack 'n' Jill together - heading up the icons, together with a First Aid kit, a well, a pail of water, and some generic 10-through-Ace symbols. Winning combos are accompanied by some nice animation on the reels - a pouting Jill a particular highlight.

Hitting five Jacks on the reels pays a 15,000-coin jackpot, while five Jills pays 10,000 coins. You can also form winning combos with a mix of Jacks and Jills.
The Jack & Jill logo is Wild and substitutes for all symbols in the game other than the Pail. All Wild wins are doubled.

The pail, meanwhile, triggers a free spins feature when you land three or more anywhere on the reels. You will win 15 free spins with a 4x multiplier attached - not bad at all. Five pails on the reels, meanwhile, as well as triggering the bonus feature, awards a 10,000-coin payout.

Rhyming Reels: Jack and Jill is that not so rare thing - an online slot from Microgaming that is slick, simple, and offers great bonus wins. If you like this, and haven’t checked out the developer's other Rhyming Reels games, hunt out the funny Georgie Porgie slot and another in the form of Old King Cole slot: both offer similar comic delights.