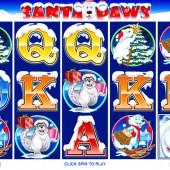 Taking the fun animal antics of their own fishing-themed Alaskan Fishing or the African-inspired Meerkat Mayhem and attaching it to a Christmas theme, Microgaming have come up with an enjoyable game in the form of Santa Paws.

As the title implies, this 5 reel, 20 payline slot from developer Microgaming has an animal theme, so instead of Father Christmas and elves we get polar bears, arctic hares, and cuddly seals. Rudolf the Red-Nosed Reindeer here has been transformed into Rudolf the red-nosed killer whale (naturally!) while a present-laden penguin, a snow owl and some snow-covered 10-through-Ace symbols complete the reels.

Santa Paws - he's the big polar bear - is the Wild in the game and substitutes for all regular icons in the game except the Scattered Penguins. Five Santa Paws icons awards a 4,000-coin jackpot if you land five on a winning payline.

Earn 12 Free Spins with up to a 7x Multiplier

Three or more of those penguins anywhere will trigger a Free Spins Bonus feature, with 12 spins playable. All spins have a random multiplier attached, anything from 1x to 7x. During the feature a special Wild icon - the killer whale with a silly 'red nose' on his blowhole - will substitute for all symbols except the Scatters also.

For some festive fun, Santa Paws delivers just enough thrills to keep players interested for a while. The reels spin with some nice jingly bells over the top while 12 free spins (if you can get the 7x multiplier) is pretty useful.

However, after plenty of spins I found the bonus feature to be pretty tight - if you can hit it at all - and you're therefore relying on the Wilds to bump up those payouts. The graphics are fun - with some graphics seemingly inspired by the penguins out of kids' film, Madagascar - and the colours are bright and cheery.