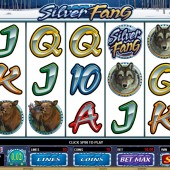 Nope, this isn’t another Wolverine-themed slot from Playtech, but rather a journey into the wild from slot developer Microgaming that will have you howling with delight.

And if nature-themed slots don’t get your juices flowing, it’ll probably have you licking you balls and sicking up your breakfast instead. Or maybe that’s just me.

Putting you in a wintry wilderness, this is obviously a take on the classic Jack London story, White Fang, which told of a wolf who sticks two paws up at the oppressive world of dogs and does what the howl he likes.

Great for casual gamblers and low-bankroll slots fans, this has friendly coin bets starting at just $0.01 and going up to only $0.05. As for the feel of the wild, it doesn’t quite have the scope of Gamesys’s frontier-themed Buffalo Wild Wins or WMS Gaming's hugely popular slice of Americana, Buffalo Spirit, but with its images of mountains, wolves and deer, it comes close.

The problem is that deer and wolves are all you really get in the way of nature. Making up the reels are the ubiquitous 10-through-Ace poker symbols plus a ‘Silver Fang’ game logo that pays out the top whack of 750 coins when you hit five across the reels.

The Howling Wolf icon acts as the game’s Wild, and substitutes for all symbols other than the Scatter. He’s also stacked during free spins. Those freebies can be won by hitting at least three paw-print symbols on the reels. Three will win you 15 free spins with a 5x multiplier, while four gets you a 20x multiplier, and five paw-prints gets you the same number of spins with a whopping 50x multiplier. The free spins can be re-triggered.

The free spins aside, there’s not that much to see here, and as I mentioned before, I would have liked to have seen a better range of symbols on the reels. Maybe Microgaming just don’t do eagles...