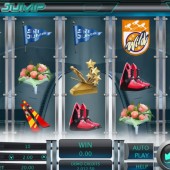 Winter Olympics sports slots are thin on the ground so it is a delight to see Genesis Gaming decide to add this intriguing prospect to the Microgaming Quickfire platform in the midst of so many repetitive themes being used for new slots.

Ski Jump is a 5 reel, 10 payline slot that is based on the thrilling winter pursuit that has spawned legendary cult heroes over the decades including Eddie “The Eagle” Edwards as participants that fly through the air in an attempt to earn glory.

The symbols are all linked to the sport of ski jumping you will be unsurprised to hear. These include skis, ski boots, ski flags, goggles, flowers, helmets, medals, and trophies. There are no regular 9-through-to-Ace symbols which actually makes a nice change.

Look Out for the Wild!

The Wild symbol is represented by an orange Wild icon. It can only appear on reels 2, 3, and 4 so don't worry about looking for it on the first and last reels. It substitutes for all other symbols, except for the Scatters, to complete winning combinations.

Ring the Cowbells for a Re-Spin

Scatters on the reels come in the form of the unmistakable cowbell. The cowbell is synonymous with the sound of winter sports as the spectators ring the cowbells to get the atmosphere going at ski jump events. On this slot, they create an exciting atmosphere for another reason. If you hit two or more of the Scatters on the reels then you trigger the Cowbell Re-Spin Bonus where the reels that have a cowbell on them remain in place for one more spin as the rest of the reels re-spin.

Ski Jump to Glory and Wins!

The main bonus feature on Ski Jump is the Ski Jump Bonus. This is triggered with three or more cowbell Scatters across the reels. Once you have enjoyed the re-spin, you will then enter the Ski Jump Bonus. This is one of the more interactive bonus features available on the market that has a Horace Goes Skiing (anyone born post-1980 might want to Wikipedia that reference) feel to it. You must bash the mouse button or space bar on your keypad to try and pull off a successful jump and win cash prizes in the process. Certainly better than your average Pick'em Bonus!

One last feature available on Ski Jump is the Ski Jump Wild feature. This is a randomly triggered feature where at any point ski jumpers might appear on reels 2, 3, or 4 and turn positions on those reels Wild. If two ski jumpers land on the same position then multipliers will be awarded for wins.

Ski Jump is a cracking little title. Microgaming needs to get more of these slots onto its Quickfire platform because they take a more unique theme and use that to their benefit to offer a fantastic slots game as opposed to offering a sub-par branded slot such as Game of Thrones. The bonus features on this slot are some of the most exhilarating I've played in a while and I am always a big fan of an interactive bonus, especially one that feels like an arcade game. I can't really compare this slot to any on the market and that's a credit to Genesis Gaming for releasing such a title.