So Much Sushi slot

So Much Sushi slot review 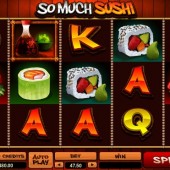 There are a number of different themes for online slots out there at the moment. Egyptian-themed, Greek mythology-themed, Roman-themed etc. You've seen them all, you've probably played them, and you know they work. So it is interesting that somebody in the creative department at Microgaming decided to base a slot on sushi. Yes... sushi. Even more interesting is that the developer decided to launch this less attractively named slot at the same time as its fun and colorful So Many Monsters slot and So Much Candy slot that certainly looks like the more aesthetically pleasing release.

Hate the Sushi, Not the Game!

So Much Sushi is a 5 reel, 25 pay-line slot that takes you on an Oriental journey where you will encounter all types of sushi. Don't worry, if you hate sushi, you won't have to eat it. If you love sushi... well, you can look but you can't touch! Well, you can touch... but only through a screen... you know what I mean! You just can't eat it ok!

The most amazing thing about this is the fact that it's actually been done before. 3D slot developers Betsoft Gaming had the ingenious idea of actually releasing a sushi-themed slot when they released the mildly entertaining Sushi Bar slot. We are not in unchartered territory here people!

So Much Sushi has a cartoon slickness to it that makes it look fairly neat but there's not much on the reels in terms of symbols. There's some rice, fish, seaweed, and the regular 10-through-to-Ace symbols. I guess you're pretty limited when it comes to sushi options. The So Much Sushi logo acts as the Wild and substitutes for all other symbols to complete winning combinations, except for the fish sauce Scatters.

Earn up to 16 Free Spins

So Much Sushi is a surprising little treat of a slot. I was as sceptical as the next person when I heard Microgaming was releasing a sushi-themed slot. I mean, there's not really a lot you can do with sushi, surely? It turns out, I am wrong and naïve. There is! You can win up to 64,000 coins on this slot and if there's any reason to play this slot it is because of that plus the fascinating ways that the split symbols and free spins work. If you love this then you can also play its sister slots So Many Monsters and So Much Candy which are essentially the same slot but with different symbols.